13 replies to this topic

Continuing my never ending sadistic rampage of opening rare expensive merchandise, TNG Sisko!
The Sisko was part of a mail away offer in Playmates Interactive system's "Star Trek: Deep Space Nine - Crossroads of Time" video game, released in September 1995 on Super Nintendo Entertainment System (SNES, I believe) and the Sega Genesis (or the Mega drive here in the UK). I believe you mailed away a form in the game's instruction manual, and you received, if you where in time, the TNG Sisko figure for free (those where the days).
He represents Sisko from the pilot episode, Emissary, during the battle of Wolf 359, when he first sets foot on the station, his meeting with Picard (who can forget that?), and some of the scenes with the prophets in the Wormhole ("It is not linear") from memory, though I'm sure I'm missing something!
I do have pictures of my original sealed, however, that computer is damaged at the moment, and I can't access the files on it due to the power pack being fried. And as it isn't very economical at the moment to buy a £20 battery to collect a folder of pictures, I'll describe what he came in.
A clear plastic action figure body bag, with the certificate of authenticity inside, sealed with some sellotape.
Very exciting, wouldn't you say? And I thought I'd find some mentally unstable Vedek, a kid with a knife or a fist punching Klingon on the package.
To the pictures! 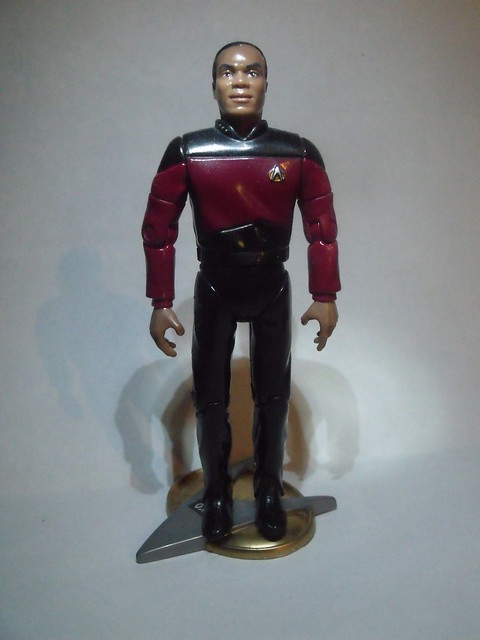 A front view. A fantastic body type, very neutral, no extra long arms, dynamic legs, or groping hands (as Loggy aptly described Commander Riker's slightly suspicious hand gesture). The body is a retooled DS9 Sisko, despite appearances. I always thought it was a Sisko head on a Wes or Picard body, but no, technically it is unique, as all the DS9ness of the utility uniform has been removed.

(Disclaimer: Base is not included, it's a spare I left on during photography accidentally) 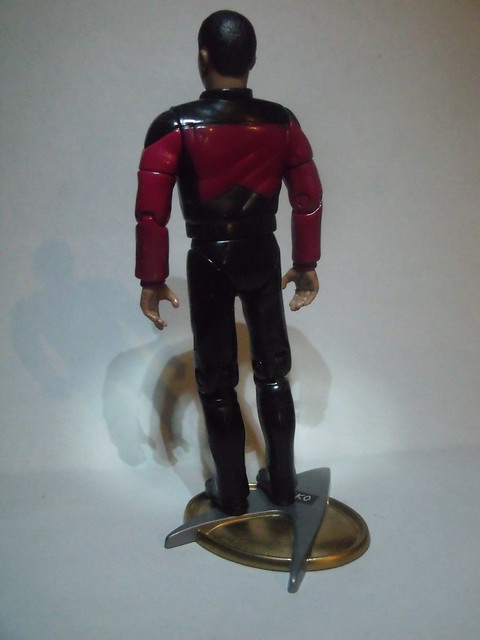 A back view. More neutralness going on around the back, great sculpting. The red is slightly off between the arms and the body, but not a deal breaker for me personally. Also, whether this affects you or not, the DS9 undershirt is still visible at the end of the cuffs, no doubt because they wanted to keep costs down after a retool of the body. No problem for me like the paint, but I know some people go nuts over something like that. 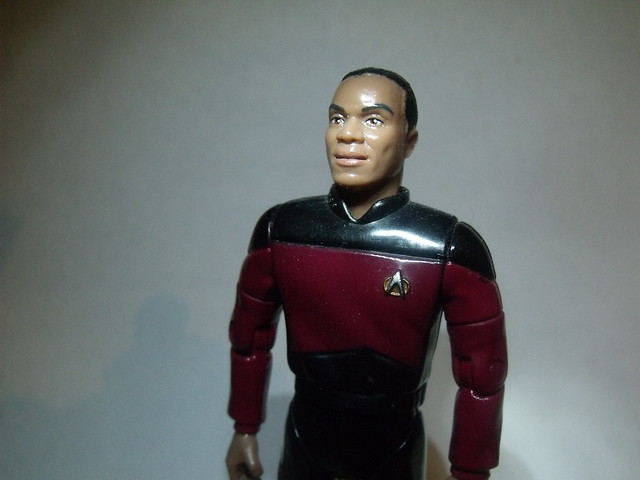 A close up of the head. Just like the DS9 Sisko, a great likeness in my opinion. The badge has faded a bit, but great all round beyond that. 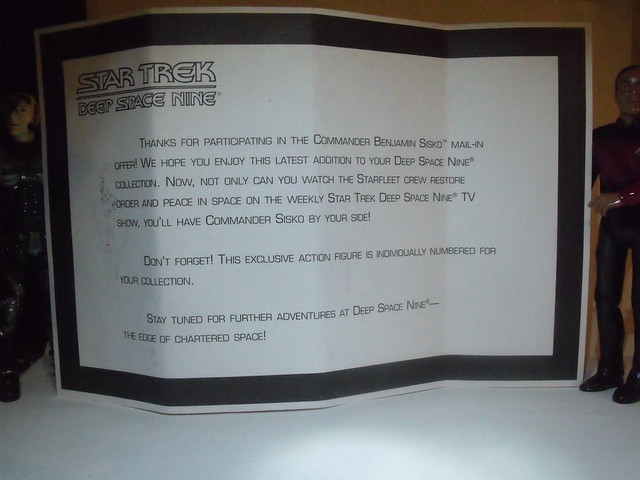 The certificate of authenticity that came in the Sisko's bag 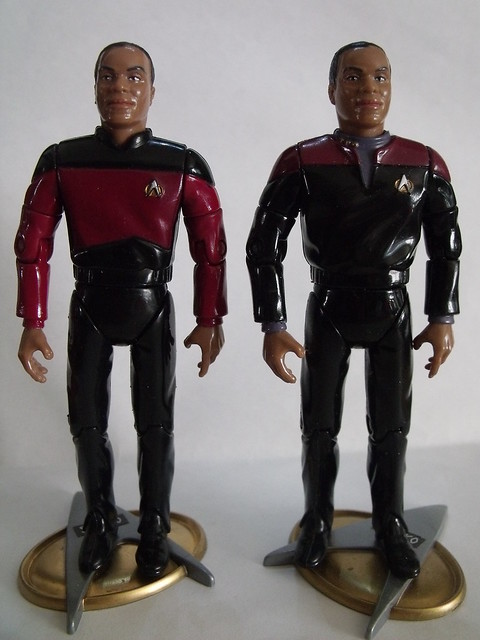 A comparison between the original Sisko, right, with the TNG Sisko, left. 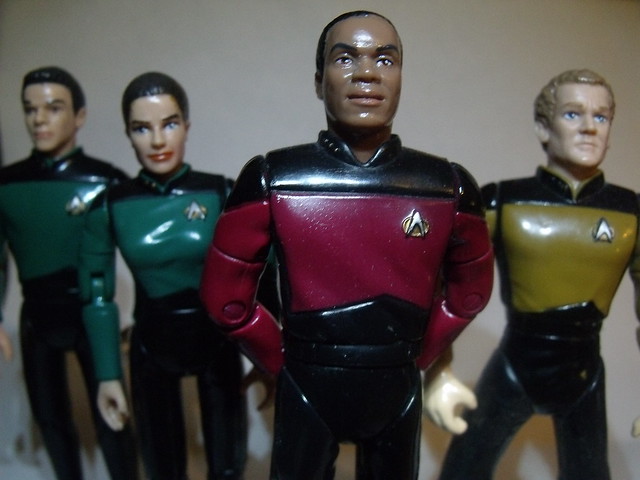 Would I recommend him?

Certainly! Just to get a Sisko from the Wolf 359 battle and have him on your shelf, not to mention completing your TNG DS9ers.

And I've got to give Playmates extra credit for not going the cheap route and reusing a body, instead retooling an existing one and making Sisko with accurate height and build proportions

Like many of these exclusives, due to his vintage (damn I feel old) and rarity, and perhaps even popularity, he still commands a high price. Still, this one came at the ridiculous price of £1, proving you can buy the Sisko cheap.

Sisko V Picard brawl! Sisko V Locutus brawl! Frustrate Kira by taking her office! Use him as the Redshirt of the week on the TNG bridge/shuttle and blow him to bits ten times over! Need I say more?

Regular reviewing should resume soon, and sorry for the lack of reviews recently. I had my birthday yesterday and it's been a bit hectic with all the stuff going on, hence the shorter than regular review. If I have the time, a review of Cadet Worf/La Forge may quite possibly be up soon, so trust me, I'm not finished yet!

Nice review. And thanks for mentioning the undershirt-cuffs. That always bothered me somewhat. Still, I'd love to have that figure. But no luck so far.

Actually...the Crossroads Of Time sisko was a kitbash figure, they didnt resculpt him to make a new figure. He was a reuse of old parts already

"Whoop! No gropey hands! Yeah A'right! Haha! Whoo!"- Ben Sisko in duty uniform while playing baseball. Thanks for the shout-out!

Great review, Redshirt! This really is a supreme figure, just lots of fun, and really good looking. I guess the undershirt thing you could take or leave, and in some ways it bothers me, in others it doesn't. In fact, this figure sort of reminds me of the TNG hoodies with the cuffs, but that's neither here nor there. I remember a friend of mine back in the 90s telling me about this mail-away figure, and how he had the game on Nintendo and had passed it on because he wasn't interested in Trek. Apparently the game was so bad it was second only to the 7th layer of hell, but I would've loved to have been able to mail away for the figure. Though being in Australia probably would've precluded any chance of that anyway. I've kept my eye out since, but the cost, especially for postage, has made my purchase of the figure fairly prohibitive-- especially for what I'd be getting.

It just makes me wonder, though, what sort of hellish fiend would've come out of a reuse of the Riker body. Geez.

And just out of my own sick curiosity, a few minutes in photoshop got me here...

Sometimes I even worry myself.

@BadBunnyMike: The torso is new, not re-used from any other figure.

Actually if I remember right it is all reused, I think the torso was Data

I just double checked myself. He was just a headswap

And only limited to 4000, which they really didnt do New bodies for a production of that small during that Era of Playmates figures

BadBunny, While this may be just a headswap and kitbash, I've never seen anything to corroborate that it was an entire reuse of parts. Generally I've heard that everything but the torso is a reuse. The torso, if it is a reuse, most certainly isn't a reuse of the Data figure. If you are referring to the TNG 'monkey hands' Data with the back panel, the body is simply too wide, does not taper at the waist like Data and the 'belt' of the tunic is part of the torso rather than the legs, amongst quite a few other things. These will confirm that:

Sorry for not embedding the pics in-line, they are pretty big. Can you provide your source for this being an entire kitbash? As I said, I've always heard this was a reuse of parts save the torso, so I'd be interested to see if this isn't the case

, just because I simply can't place whose torso was reused.

And please take a look at the back of the uniform shirt. It's the wrong shape. It is the same shape as the front, whereas it should look like this (I mean Picard): That only happened with one other figure, as far as I can remember: Dr. Pulaski.

Thanks about my birthday, and I'm glad you like the review! It was one of the best year's I've had, and of course I got some Trek merchandise (soon to be reviewed I hope)!

Hahahaha! I was trying to think of how to describe his hands, and the differences between the DS9 and TNG figures, then what you said came to me! You know, the cuffs doesn't bother me at all. What does is suddenly realising the TNG cut on the back is screwed up...I'd heard it was pretty bad too, something along the lines of the original plan for the game went down the drain half way through making it (isn't it always?).

My god man, what have you done! It's, an abomination! Even I didn't think I could come up with something so hideous. I've got to make that now.

(I have thought of making Captain Rixx from Conspiracy with a Riker, so he does, groping hand and all, have some uses)

In addition to Daysleeper's and Loggy's comments, here's some evidence to back their arguments: 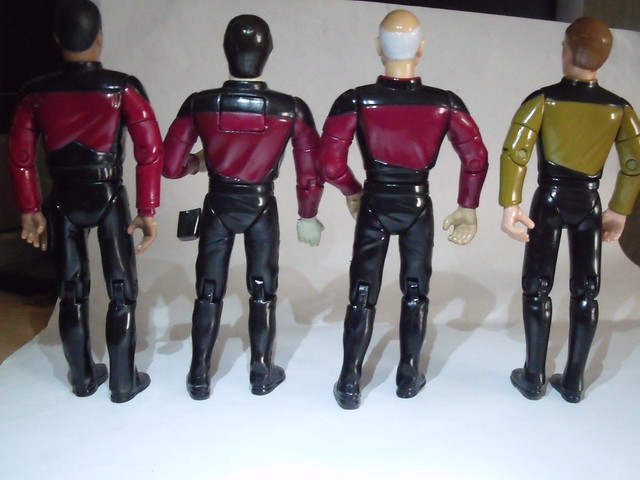 My original TNG Sisko, an original Redemption Data, TNG Picard, and Barclay (I don't have TNG Wes just yet) 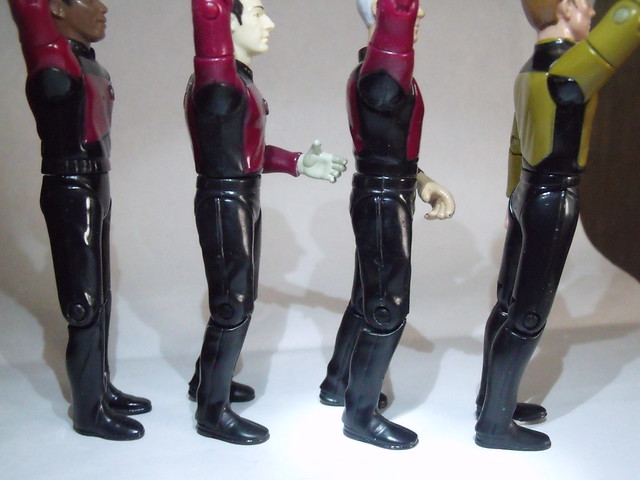 A side view, in the same order

I'd stake my reputation on Sisko being a retooled DS9 Sisko

Looks like Sisko, Data, Picard and Barclay are doing a futuristic dance...

I kick my ass cause i could have gotten this back in the day when i purchased the DS9 game for my Sega Genesis.  But i was not collecting figures back at that time,