86 replies to this topic

A strong result -- this one doesn't get the bidding wars that Set III generates -- but this is still a bunch of dough.

Ever seen one of these packs? This one sold in the UK recently. Pretty cheap too, not counting the shipping... That's a lot of bids, but market priced at the moment. All of these are up for auction regularly, but the bidding wars for them are brutal for some reason, as is the pricing. I can't figure out of it's nostalgia or market speculation or whatever -- it's not like these are in comic book stores at the moment anyway.

Are these the kids of 90s buying themselves what they've always wanted, or Comic Book Guy characters trading these among themselves?

Well this is interesting. I figure its a long shot they revive the Star Trek line, but you never know I guess.

Oh wow, it's great to see Micro Machines making a comeback again! (Bonus that the article has Lightning Line Power Rangers reviews above it too as I'm actually really impressed with some of what Hasbro did there despite an admittedly very negative initial reaction.)

I didn't realize that the line needed to be relaunched though, and I'm admittedly not sure why Hasbro didn't just relaunch it themselves. Wicked Cool Toys does apparently have a track record with iconic brands though, so I'm definitely optimistic about this.

As far as Star Trek Micro Machines go, I'm definitely not holding my breath, but you can put that Fry/Futurama "Shut up and Take my Money!" meme on an Empire State Building sized billboard if they ever make a comeback. I'll be the nerd camping out at the store for them like the people at iPhone launches. One thing that still makes steam come out of my ears every time I think about it, is how badly the last opportunity to relaunch the "Trek" Micro Machine line was blown. Back in 2012, Hasbro was supposedly the "master toy licensee" after inking a deal to produce STID toys among others. We got those awful Kre–O things that Hasbro tried to ram down our throats, but nothing else, and the whole thing was an atrocious wasted opportunity. With the master toy license in–hand they could have pounded out Micro Machines and easily gotten a good chunk of my money that remained in my wallet instead, and they might have had a Trek product that wasn't a peg warmer. The fact that they made Playmates Toys' 2009 line look like it was handled competently never ceases to amaze me for all the wrong reasons. (I'm reminded of that quote from Steve Jobs around the time of his return to Apple where he notes that they lost something like a million dollars in the previous quarter and quips "how the *colorful metaphor here* is that even possible?" That's sort of what I'd like to ask whatever "genius" at Hasbro managed to butcher their Trek line in 2012.) Meanwhile, in 2015 when Star Wars was relaunched, they wasted no time in dusting off their classic Micro Machines line and expanding upon it. They got my money very quickly upon doing so, and as much as I prefer Trek, I'd happily plunk down an absurd amount of cash for more Star Wars Micro Machines too. I would think that the demand for Star Wars Micro Machines (they flew off the shelves pretty quickly around here,) would have tipped them off to the fact that there's a demand for the Star Trek ones too, and would have hoped that they'd try to get the license necessary to get them back on shelves, unfortunately that doesn't appear to have been the case.

I would love to see the Trek line relaunched though, especially with new ships the way the Star Wars line was relaunched. The Enterprise–E is one of the most difficult ships to find; they could reissue that alone for the insane markup of $15 and people would snap it up in a heartbeat, and we now have two (and very soon three) shows that will have never had Micro Machines representation, while a good portion of VGR had no Micro Machines representation either. You could reissue Collector's Sets I, II, and III, and still have more than enough new material for a Collector's Set IV, V, and very likely VI, not to mention all of the standard releases that would comprise those sets. With all of the other successful miniature ship lines, reviving Trek Micro Machines has seemed like a no–brainer to me for ages, I just wish it would hurry up and happen already.

It's crazy to think that in the present the number of small Star Trek ships is magnitudes greater than we ever had in the 1990s.

Micro Machines still hold a special place in my heart -- I had like 300 Star Wars & Star Trek micros growing up and still buy them once every couple of months just out of fear that I don't have enough Trek Micro Machines -- but I'm not holding my breath for every Trek ship ever made, as Eaglemoss is doing.

As a piece of 80s nostalgia, I hope they do well in the marketplace.

The variety of ships offered is somewhat different from the US-market pharmacy single-packs which, for instance, didn't have a Grissom and a few other ships, but did have the detachable Enterprise-D from Generations. This one, on the other hand, has the earlier non-detachable Enterprise-D and a few other older ships. But things like the Stargazer were offered in both US-market and Japanese Namco single packs, among others, most notably the Romulan warbird and the original Enterprise seen here.

Obviously, it would have been great to have a full lineup of single-pack ships with Defiant, Voyager, Farragut and stuff like Sisko's sailing ship, etc. That would have saved a lot of people a lot of money back in the day, but those were kept in small volumes and big collection sets. 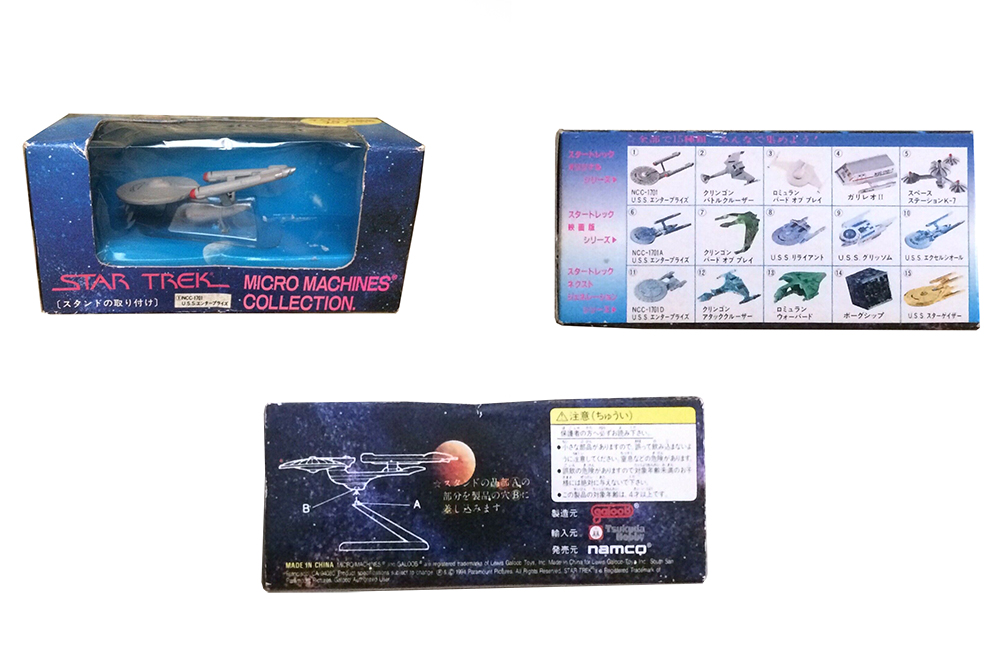