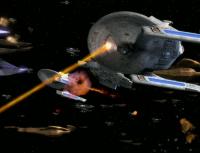 In Belanna’s case it was her Federation citizen human dad that was disappointed in how Klingon she turned out to be. I can only imagine what that type of parental rejection does to a young child. Worf was also a pretty bad dad. There were all kinds of human conflict in the earlier Trek series. The way things were shown or not shown was different.

I think that is why I lean more towards DS9. They wanted to explore situations that they could not do in TNG and VOY. Really a missed opportunity to have the Maquis in Starfleet uniforms by episode 2 of VOY. There could have been a lot of great drama to mine getting the two crews adjusted.

I think the father issues make sense. That seemed to be a common thread in Trek with Sarek/Spock, Riker and his dad, Tom Paris and the admiral. Belannas dad was also a jerk to her.

Really liking where this is going! The Stargazer is awesome, inside and out.

I might be in the minority but I am not a fan of the STO ships. It is cool to bring in visual references that many fans love though. Just not for me. I was really hoping one of the ships in the fleet was a Galaxy class but it was a different class.

I also felt Guinans scene was off. She normally illuminates some key part of the story or helps another characters journey. It felt like a catch up scene which isnt how she has been used in the past. If Picard had given her a little bit of his family issues that would have made sense. Maybe we will see more of her.

Someone I know is serving on the editing team for season 3 and says that it is really good. The only tease I allowed him to give me was that the show runner is a big fan of the Kirk era films. So maybe this means we will see elements from those stories. Really bummed this will only have 3 seasons but maybe characters will be seen in future spin-offs.

This season is a mixed bag for me. I like the concepts a lot. Many things in the early seasons of the show are just not great and hard to fit into the overall timeline. The thing that bothers me most is that by the distant future warp is still the mode of travel. In Voyager alone we had so many faster than warp options that after a few decades or even hundreds of years would have been perfected. It should also be easier for them to replicate the 23rd century technology of the spore drive, especially almost 1,000 years later.

They should have waited for the season to finish before airing Picard - it overshadows Disco in my mind.

In Topic: Top 5 Figures You Want to See in the Relaunched Lineup

Captain Boday or nothing.