64 replies to this topic

Since we don't seem to have a dedicated thread for this yet, I thought I'd get one started.

DST revealed a somewhat unexpected TNG Phaser roleplay toy at NYTF'15 last week. It's wonderfully representative of many of the phasers seen between seasons 3 and 7 of TNG.

To start the discussion, I'll just round up every image I can find of the thing... 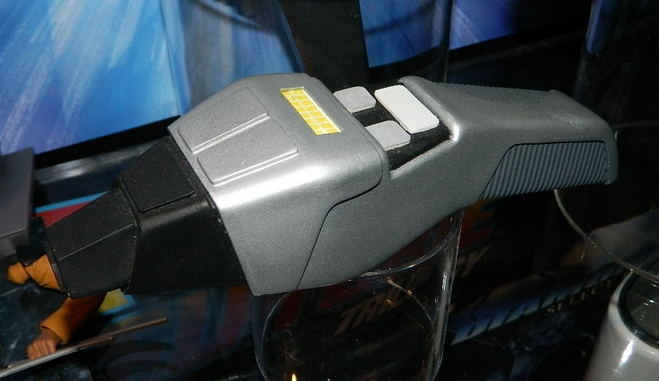 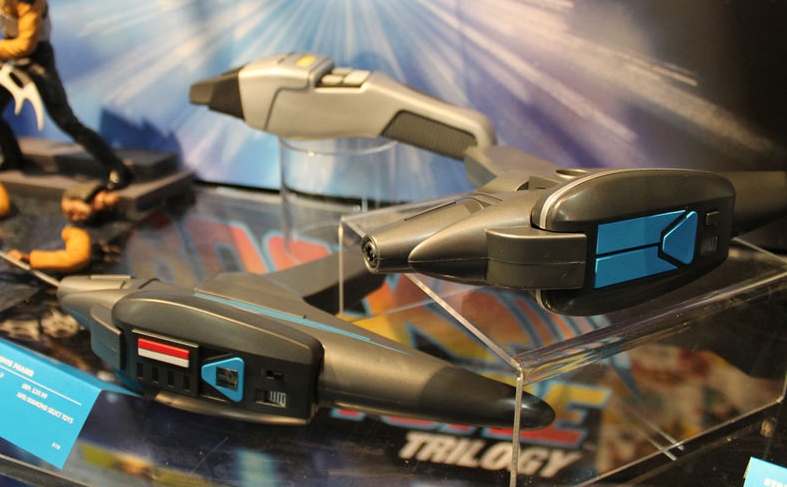 Finally! A TNG phaser for righties!

I wonder will this have any interior-guts play feature, like the Enterprise Phase Pistol and the Playmates STV/VI Assault Phaser did?

I also hope it has the little bleeps for adjusting the power setting! *fingers crossed*

It'd also be fantastic if the power buttons worked as intended (plus and minus) as opposed to playmates 'stun and kill'.

This was really welcome news, and it's something that I've been hanging out for since the first TOS phasers were released. Way back in 2009 (or thereabouts) I got a question published in AskDST about them making a TNG phaser following the success of the TOS stuff, and whomever answered the question quite was vehemently against any TNG-Tek; something along the lines of "thanks for asking, we're just not that into it." It's nice to see a reversal of that opinion, albeit half a dozen years later.

It's a very nice sculpt, and I would love some rubber grips. I have a Ruby's TNG phaser, and while it is fun to toss it around, those plastic grips do feel a bit... well... plastic-y (what a genius I am), the sculpt seems somewhat oversized and the limitations of the sounds are a bit limiting (the genius strikes again). Adjustable power levels seem to be likely, because they have done it with the TOS phasers. Lights would be similarly lovely. I just hope this will be released and it doesn't disappear into the 'nice to haves' of the past, with some folks having suggested this may be vaporwear.

I feel this phaser is def the right entry point to TNG Trek Tek. Eventually, I think they need to get an away team set the same way they have one for TOS, and a comm badge with voice sounds would be nice, and eventually a Tric.

I actually like the speaker design of the dolphin more, but this is more iconic IMO.

What would be cool is if they included a feature where you could 'un-lock' different settings by fiddling with the power settings, like Data did in "The Arsenal of Freedom" (Despite that being a S1, 'Dustbuster' Phaser). I think that'd enhance the fun of it.

I feel like this is a stupid question, but I really dont know much about the Cobra head Phaser, did this one have the removable type 1 like the TOS era phasers? I know they had a small handheld one in TNG.

There is no such thing as a stupid question. No, they did not have the removable Phaser one. They had an independent Phaser one dubbed the 'cricket' Phaser due to it's size.

I'd love to have a cricket that is the right size.

Yep. A cricket would be another good choice. In fact, that would make sense to add to a TNG away-team box.

I was thinking that DST could do a "Cricket 2-Pack". It could include the all silver season 1 Cricket and the tri-colored season 3 thru 5. They are the same prop just with a different paint scheme.

Yeah that would be perfect.

Well... lets get the ST III Phaser 1st, then the TNG and then worry about a cricket! At the pace we get trek tek that seems like a long way off.

I am really looking forward to this phaser as well. I have always liked the "cobra head" phaser. I still have the playmates version from the 90's from when I was a kid. My hope is that it is as good, if not better, than a master replicas type of prop. Hey DST, I'm still hoping for a ST:V and ST:VI Assult phaser, lord knows how much those playmates versions are

And since you are now doing TNG Trek Tek how about a "Dustbuster" phaser, I'm really hoping for one of these.

Dustbuster phaser? But where would they put the screw holes?

Newforce is my home page.


The TNG phaser looks great. What is the difference in the two ST 3 phasers? If it hadn't been already asked.

The TNG phaser looks great. What is the difference in the two ST 3 phasers? If it hadn't been already asked.

I believe the new one with the side charging port is based on an unused pre-production prototype? People here will know more than me, I was only told its origins at Toy Fair.

Also tagged with one or more of these keywords: Phaser, Star Trek The Next Generatio, Diamond Select Toys, Roleplay, Toy