90 replies to this topic

Noticed the trend with the Picard figures here too.

What's interesting about Metallica Locutus is that it was never super-plentiful. It feels like they made 10,000 of them (in reality it's far more) or some number comparable to TNG Thomas Riker, but this figure, even before the Picard show, was never present for sale in any great number. You can certainly find them, but there are never a lot for sale any given time, compared to others from the same set like Soong or Pulaski.

For example, out of the 20,000 figures for sale on eBay at any one time, let's say a year ago, there would be like 4 or 5 of them for sale. That's not a lot, and people have wanted a premium for it so it would be listed for like $10 to $15. With the Picard show in progress they're getting bought at almost any price now.

I never saw it in stores back when it was new either, and I was actively looking too. At the time I think it was getting scalped big time, but that whole set, 1995 as we call it, was not on store shelves long. At the time I was only able to get the firing Borg, firing Geordi, Tasha and, uhh, Galen I think. Never saw the Nausicaan or Locutus.

How about starting a new campaign for the "firing" TNG Phaser from DST...
Or maybe shifting the ship values with the Enterprise-C that has been promised?
Maybe even shifting more values on everything for another company to do Star Trek some justice? It's been long enough. Time for a change.

Phaser values are actually holding quite high due to demand from cosplayers, even though type 2 phasers had been made in absurd amounts. The First Contact phasers have always seen high demand.

Speaking of ship values, the Ent-B from DST has been going for well over $100 lately. I'm glad I got mine like 6 years ago.

5. Rom and Nog (this is really weird, but they've been going for about 20 bucks)

Could this be because fans of the recently deceased Aron Eisenberg are just finding out he had an inaction figure?

I think his fans would have likely had this one way before he died, but the Rom & Nog figure has been one of those where only about 5 or 10 are for sale at any given time on eBay, out of 20,000. It was never plentiful and kind of overlooked.

At times there are only one or two of them on sale. The same thing happens with a few figures like that and people freak out and get into bidding wars.

This is one of the Top 5 highest results for this figure of really the last five years. I saw that very few were for sale in the first six months of the year, which is what could have caused this stampede.

One thing I am not seeing are loose Red Datas. I haven't seen that in a few years, and that's really perhaps a factor of collectors hanging on to them, because they cannot be easily bought, unlike the MIB ones. I can't remember the last time I saw one for sale. 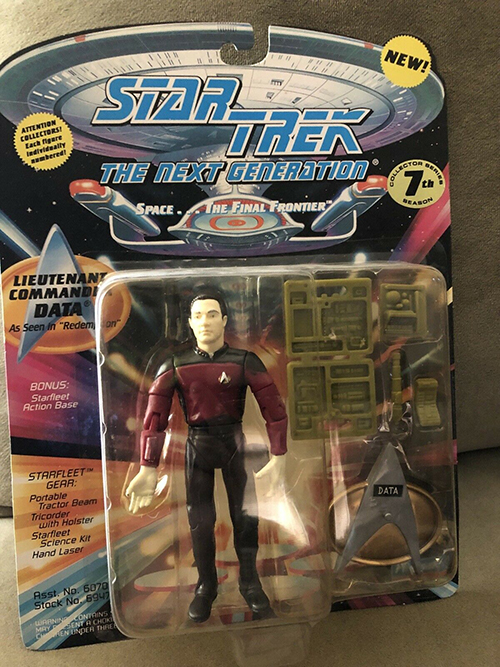 Very realistic price in this day and age, and one of the lower results in recent memory. Sometimes these go for about $200, but that's rare to witness. But this is by no means the floor.

I think we're gonna see a bunch of these come to auction in the coming weeks. 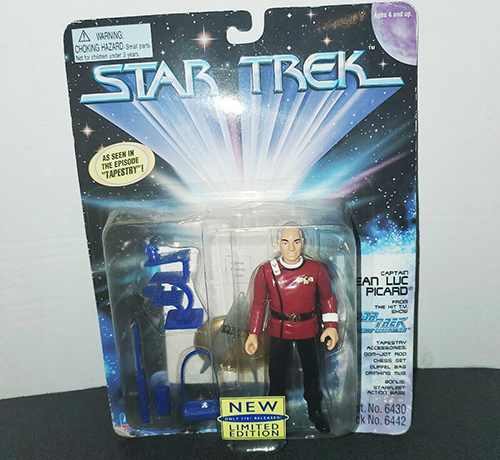 Of course, this is the Picard series phenomenon, but even back in the day I think this figure was underproduced and scalped with some effort.

However long this link lasts: https://www.ebay.com...&orig_cvip=true 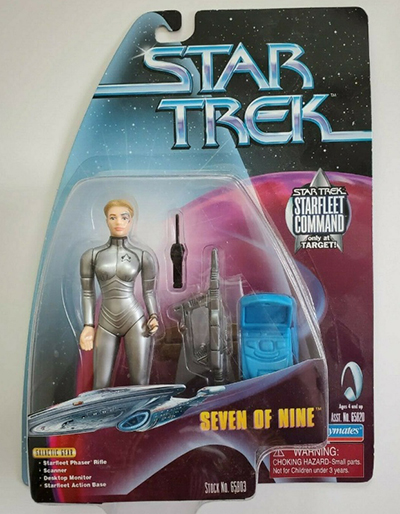 A large group of figures recently went to auction, and while the results were pretty varied for most items, the results for some Canadian-carded figures were through the roof.

It makes sense to post them here in this fashion, if just to convey that someone was willing to pay pretty close to $100 for each, it seems.

I have some of my own thoughts on which ones could have been worth this much -- pretty much Ambassador Spock and nothing else -- but it's worth noting that some of these have not come up for sale within the past year at all. So if some of these results seem a little high, or if the bidders were a little high themselves, "go find another" as they say.

The Guinan, Lore and even the Vorgon with pog on Canadian cards have been selling for very mild prices in the past few years, for as little as $8, so some of these results are just baffling. Ambassador Spock, on the other hand, is very hard to find and has come up for auction a grand total of 3 times in the past 5 years, I think. Second rarest here is O'Brien, but even I think that this is a little much. But the bidders put up quite a fight for all of these, even though some careful looking could have landed them much cheaper.

Is this the effect of having two Trek series in production at the moment? Could be. But these are all very strong results, and it looks like the top bidder could have all been one person. 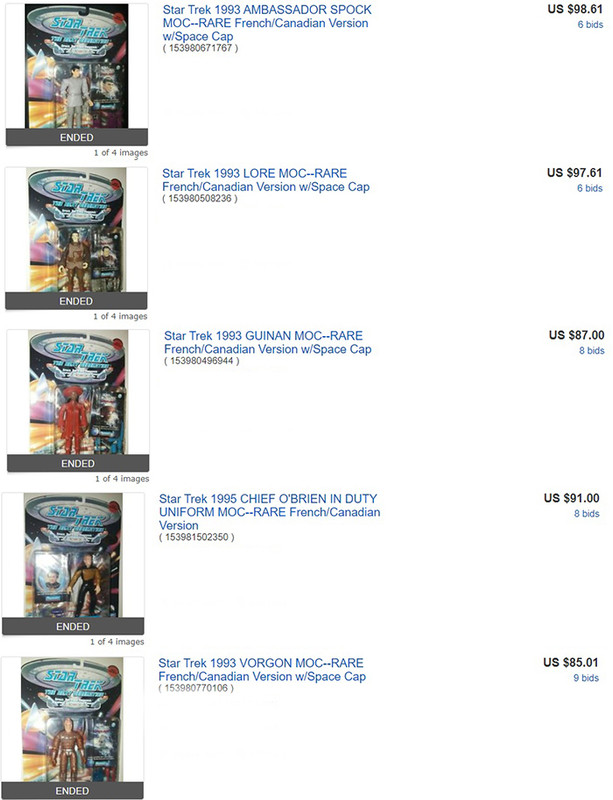