Welp folx, it didn't take long to see the first custom figures based on the 2022 line, and it's nothing short of a red Data. The work on the card here is good, but the paint finish, I think, is nowhere as glossy or as saturated as it would have been from PM.
Will we see something with the rarity of Redemption Data though in this new line?
I'm on the fence whether such a thing would be good for collectors if the production runs are as small as red Data was, but it would be nice to see some convention specials with smallish runs of like 5K figures. 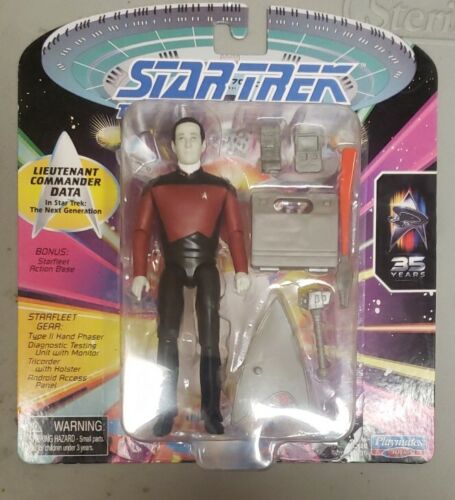 If you thought that the Star Trek lineup escaped the bootleg experience, here is a look at some rare examples of 6-inch First Contact figures done by a less than licensed manufacturer.
These are indeed the 6-inch figures, which would have been released in fine retail establishments (not great, just fine), and for the most part they are slightly simplified recasts of the real thing, with paint processes that are in the very general ball park of the licensed versions.
Where there are some differences are out back, as the less-than-licensed manufacturer here opted for screws instead of a more complex structure within the torso that could be glued reliably.
I think this was done because the torsos are not hollow inside, with more complex joining rods to hold the two halves together, but are actually solid plastic with just enough space for the arm and leg joints. Gluing those together could have been difficult because the glue would not be flattened but would sort of compressed and could get into the arm and leg joints, and they'd be frozen in place. Turning the legs and arms and using them for leverage could pop open the two halves pretty easily. 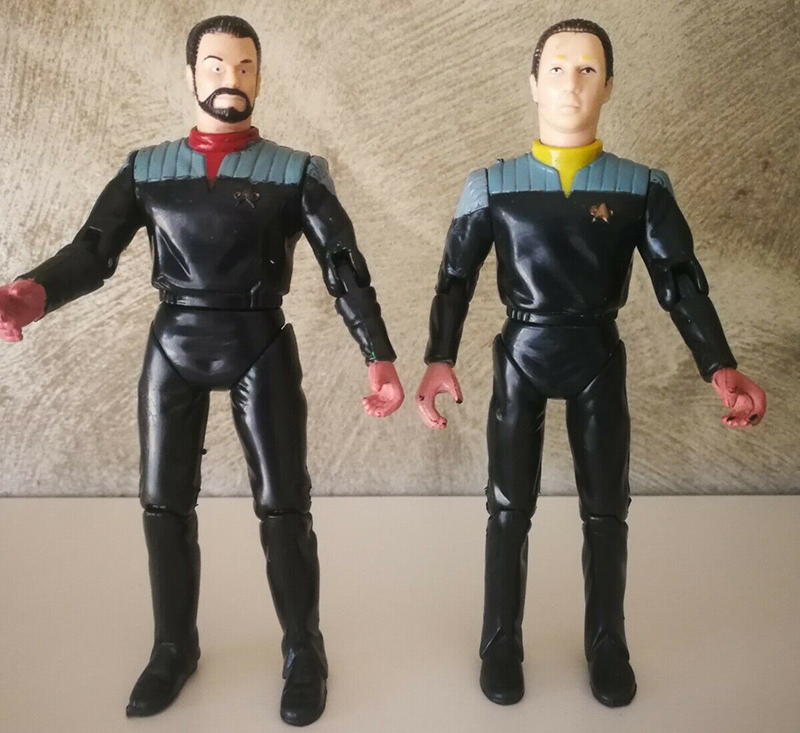 On the other hand, with a glueless approach using a single metal screw one doesn't really even have to construct a housing for that screw on the front part of the torso, as it can just be driven in.
Either that, or the torsos could just have more simplified interiors where there aren't any joining rods that could be glued together, or just a single one for the screw.
The paint processes are obviously more simplified here, especially when it comes to the eyes, but the hair details also appear to be rougher and straighter overall. So Riker's hair seems kind of gelled and slicked back, instead of the more nuanced original sculpt. 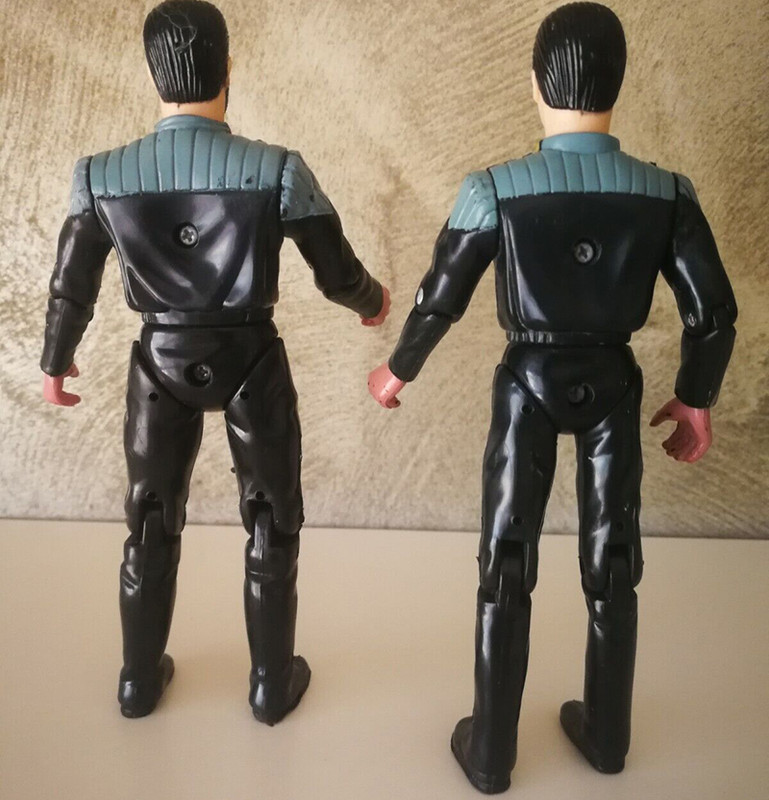 Unfortunately we don't have images of the packaging for these, but if Star Wars figures of the time are anything to go by, the cards and blisters may have been some simplified version of the original FC with some kind of generic front and back not unique to the figures. But, we don't have photos of them, so that's just a supposition. Mexican Star Wars figures of the time are much more readily findable for same these days, in their cards and blisters.
It is not known if the entire FC figure run was available as part of this bootleg series, but it seems unlikely, as there was Picard with a helmet to worry about, and that's kind of a more complex thing to produce.
I haven't seen any examples of bootleg 4.5-inch figures, but I wouldn't rule out such things existing. 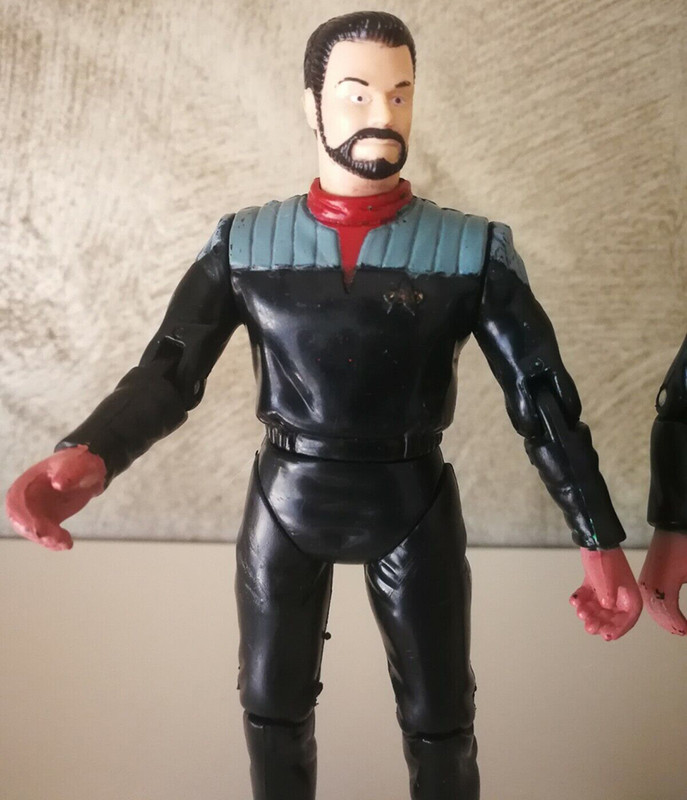 Besides the US and Canadian packaging for single packs, a number of Star Trek Micro Machines were also released in Japan in boxes of this type, which was pretty common for small toys of all types in the country, as they often sat stacked on store shelves, instead of pegs.

The variety was confined to the "early" era of the Galoob line, so there weren't ships like the Defiant, Farragut, Sisko's sailing ship, etc, even though that would have been pretty amusing to see.

The singles packs that we got in the US and Canada are pretty much what the selection was with these Japanese-market single packs.

One cool thing about these is that they can be opened non-destructively and resealed, though in practice this probably didn't happen too often. 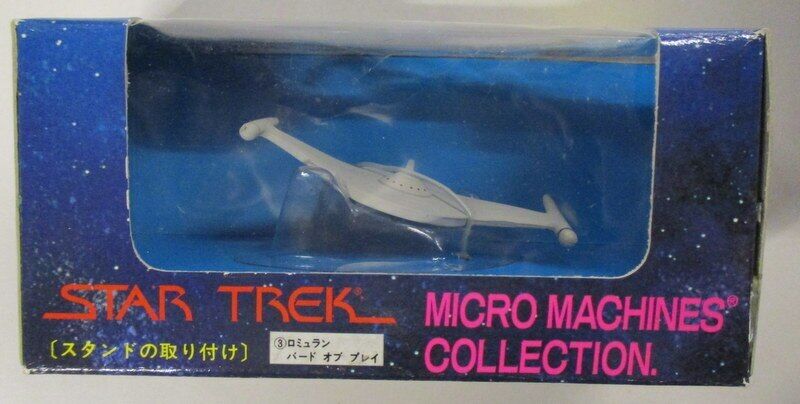 Top 5 Figures You Want to See in the Relaunched Lineup 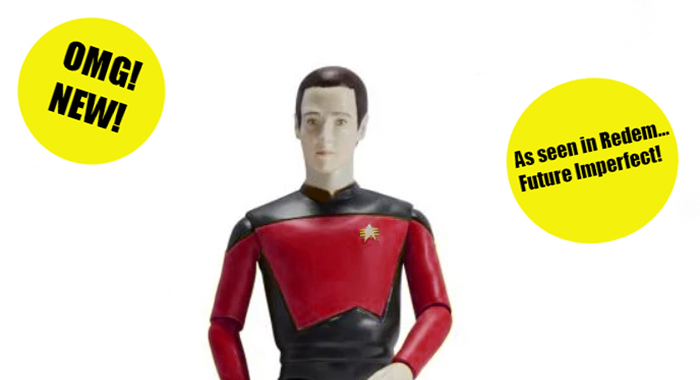 Realistically, it seems we're going to see a mix of some TOS and TNG redesigns, and figures from Discovery and the Picard series. But it remains to be seen whether the company will seek to reissue all the TNG bridge crew, for instance, over time, and whether they'll seek to go deep into series like TOS, TNG & DS9, or Enterprise for that matter.

Traditionally, the bridge crew characters were the best sellers, with the company recognizing that 7/10 buyers were adult collectors who don't take the figures out of the boxes. But we'll have to wait and see if the company will seek to do some crowd-pleasers like the TNG bridge crew, or go deeper to cater to super fans.
I've split my own wish list into two series, assuming the company will do DS9 at all, and have tried to keep it somewhat realistic. Of course, so many characters from TNG have already been made, but perhaps there will be a willingness to do some versions of main characters in outfits we haven't seen before, or tackle the super-popular cameo characters, like Shelby, who was actually discussed by Chris Overley in the late 1990s. Obviously, there are lots of unproduced characters from the later seasons of Deep Space Nine as well, much more than from TNG.
The Next Generation
1. Shelby
2. Admiral Nechayev
3. Wesley in early seasons tri-color striped uniform
4. Alyssa Ogawa
5. O'Brien in red uniform
Deep Space Nine
1. Weyoun
2. Martok
3. Damar
4. Ezri Dax
5. Sisko in First Contact Uniform
Let me know your top 5 from whichever series!