132 replies to this topic

So out of curiosity, over the years of reading different things you post about figure/ship values.....what do you expect to see for these when the new stuff hits the shelves?
Or has there been a change since the original announcement or Monday's?

Since the debuts of Discovery, Picard and all the other series there has certainly been heightened interest in some "core" figures, like the various Picard figures from the early 1990s, as well as Locutus and Seven to name a couple. With four Trek series in production, which has never happened before, there is bound to be a resurgence in merchandise as people watch these series.

Since the debuts of Discovery and Picard, there's certainly been a doubling of interest in some figures, just looking at what gets bought and the bidding contests.

Once the 2022 figures hit the shelves I would expect for interest in these 1990s figures to resurface, b/c people who didn't even remember these new will be googling them and seeing that there is a whole universe of them from the 1990s. Which ones they'll want, of course, is a separate question, but it's telling that Pmates has shown prototypes of Picard, Riker and Data, which had been crowd-pleasers in the 1990s in their various versions.

Hopefully, once the new figures hit shelves, people will see that the vintage figures are still available in absurd numbers on eBay for very little money, and discover them anew, and seek out some rarities that exist.

Reposting a list I made in April 2020 of the Top 10 figures that were growing in buyer demand and price at the time. I'd say this list still holds at the moment. (No particular order).

1. Picard, all uniform types (but not as a Romulan, Galen or Generations, etc)
2. Locutus & Metallica Locutus
3. Borg, all varieties
4. Hugh, obviously
5. Rom and Nog (this is really weird, but they've been going for about 20 bucks)
6.  Crusher from All Good Things
7. B'Elanna
8. Saavik
9. Dr. Zimmerman, MD (holographic)
10. Tasha
To this list I would probably add Pike and various Kirk figures at this point, and a few others that have surged in a more subtle way in the past three years.
And also, Janeway has been seeing crazy demand for far longer, for about seven years now. Janeway has been going for $15 to $25 for a while, and of course there is a new animated series with her that's launched just now, so that demand is just not going away. Janeway figures were a little scarce from launch (along with Torres) and with so many people buying them now the supply just has trouble holding. Probably one of the top figures to watch this year tbh.

Here's something you don't see too often come up stateside: a German-market Gowron recently sold for $12.50 + $5.80 shipping after 5 bids.

This is about average at the moment for one of these stateside, with the crucial factor here being the cost of shipping. There are still a lot of these for sale on German ebay.... but shipping from Germany can be pricey.

It's too bad that we didn't get more of this type of intl packaging, like for the 1993 wave and later on. There was intl packaging with German for some vehicles as late as like 1995, with the Enterprise-D getting some very interesting box graphics that's very rarely seen today (I've seen photos of like two). 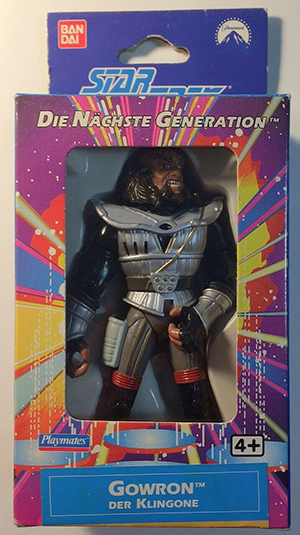 This is the lowest I've seen it go in a looong time, and I have to say very well bought. Of course, five years ago these could be found cheaper with some effort, but that was a different time with, umm, no new Trek series on the air.

Values for this one do jump around a lot, and there are usually a given number for sale at very high buy-it-now prices. Realistically, I'd say, paying over $100 is perhaps too much, but we're about to enter a time of crazy prices and a fair bit of supply issues.

Prepare yourself mentally to see these being bought up for $150 each. 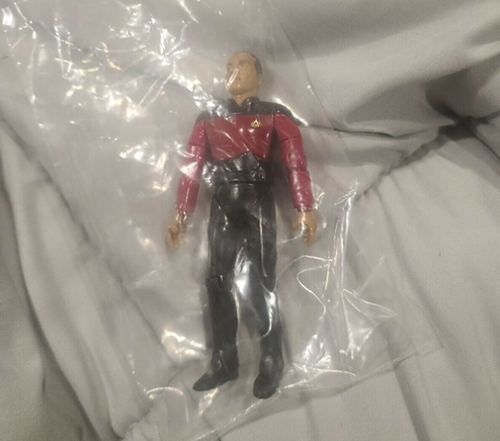 This was a bargain at this price if you were looking for one of these to begin with, as they only seem to pop up for sale once every couple of years or so. This was one of the mid-grade rarity DS9 figures on Canadian 7th season cards perhaps, though this whole category is by no means always available online every day. I think I've only ever seen about 4 or 5 for sale total. 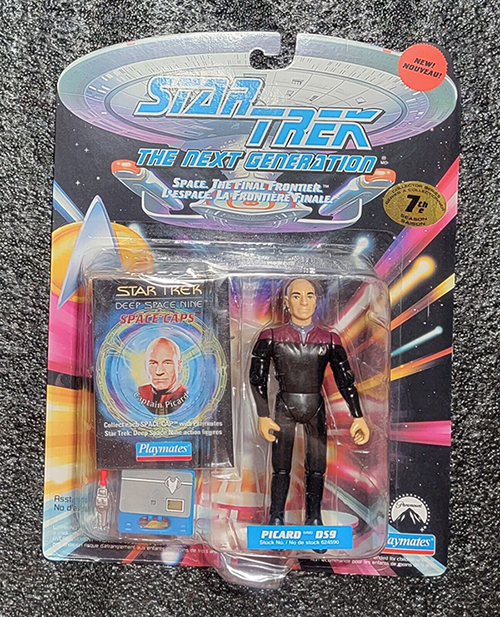 Well folx, this is the single best purchase I've seen all year, and about half of what they go for. And I don't think I've ever seen these sell for lower. I think that's about to change as the new figures hit stores and people who don't even follow these figures begin to notice this line.

And just earlier this spring we saw another great purchase of a Sisko just a few posts up in this thread.

Realistically, any time you can get these for under $100, that's a major win. 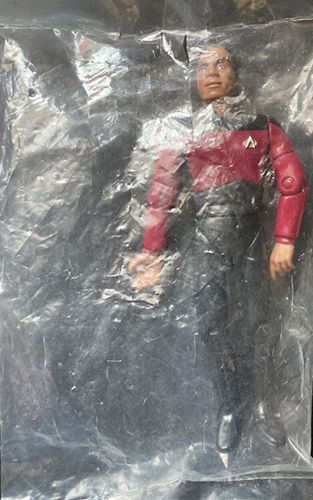 Pretty much a record price for the past 4 years, and a reflection of just how tough these can be to find.

A couple of years ago these were going for around $100 or thereabouts, as demand was meh, but the factor of these coming up for sale at all is what played a big role here in 2022.

This figure is not hanging out on eBay any given day -- I see only about two or three pop up every year. So these are not easy to find in the first place. 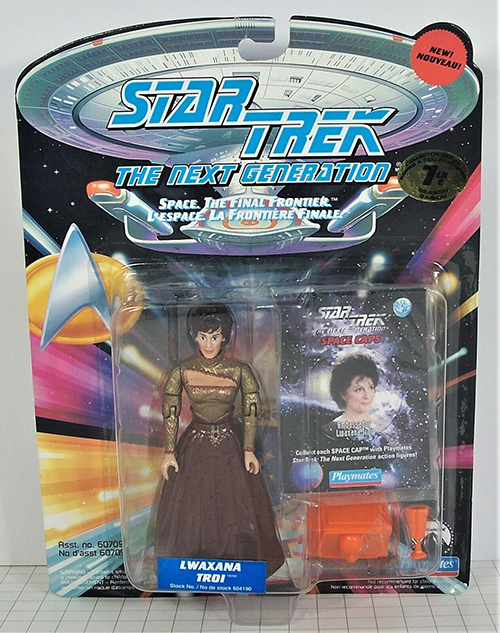 Values for rare figures do seem to be spiking at the moment, it feels like there is a big rush on some of the figures as people are rediscovering the line.

This is about average at the moment, if you can find one to begin with. I've seen these go for a bit less at times, but these are up for sale very infrequently.

Still, this is one of the more common DS9 figures on Canadian 7th season card, so there are plenty of rarer ones, and if you can get one for $50 at the door that's not a bad result. 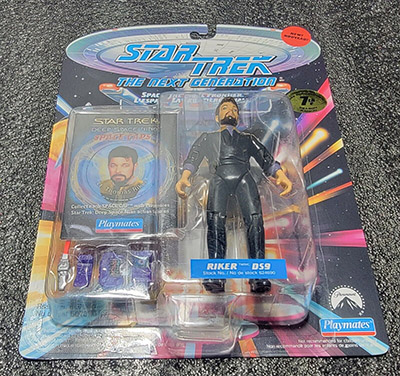 This one actually features a ton of differences compared to the US cards:

- O'Brien is flossing the Enterprise-A here, of all things, instead of the Defiant

- No Warp Factor Series I logo at the top right

- Bandai logo at bottom right instead of PM

These intl figures were not publicized well at the time aside from McCoy in dress uniform, which is a kind of "cheat" anyway cause it panders to collectors, so collector awareness of these figures was low. 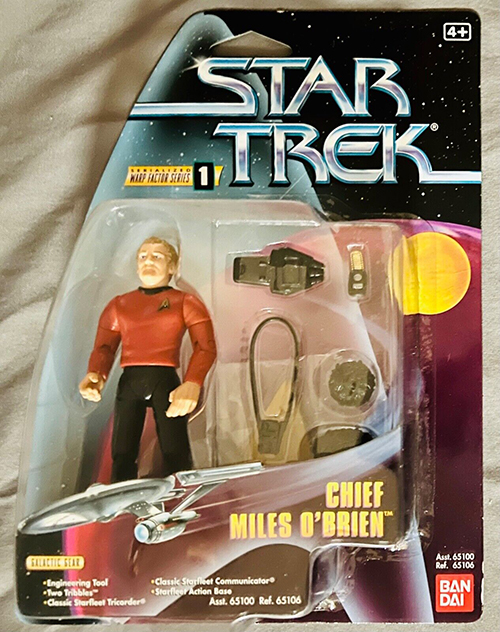 Oh no, not at all. They've been extremely not in demand for the longest time. Very little interest in them, aside from Picard in spacesuit, but... that's about it. That whole line, and the other 6-inchers, just felt like it went nowhere. Not even seeing any interest in the Canadian ones.

8 user(s) are reading this topic