Toy Fair 1998, display by the manufacturer. 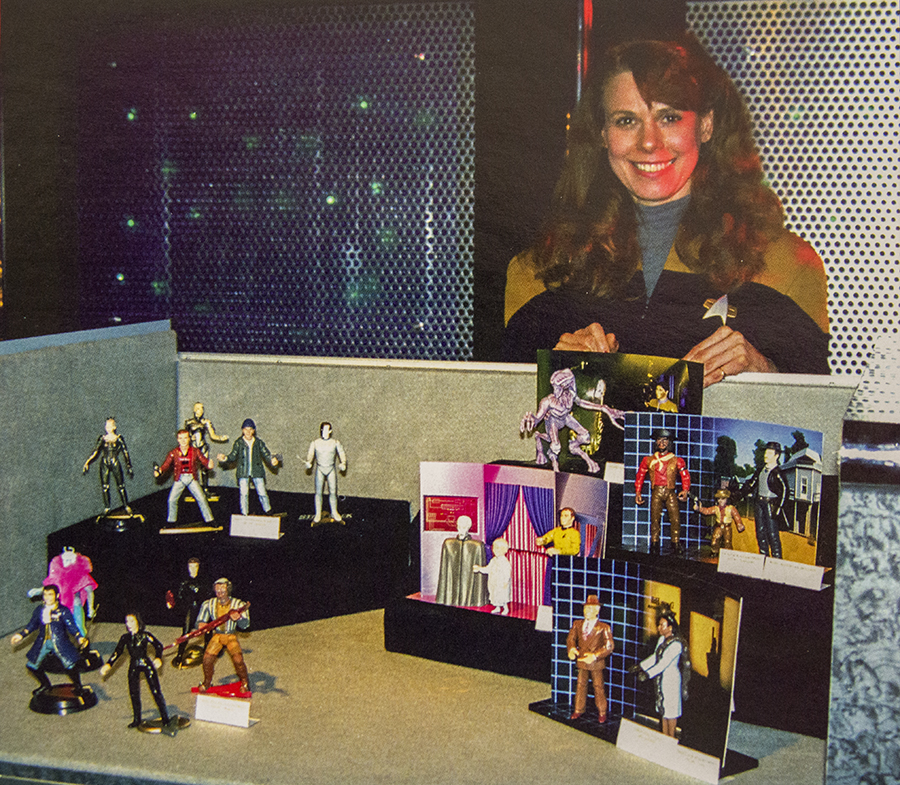 At the same Toy Fair 1998 display Playmates also exhibited the larger format DS9 figures with their various USS Defiant stations -- I will show those later.

I never saw this set at retail, or just a couple of times. These were a strange attempt by Playmates toward 1998, I thought -- these were aimed squarely at completist collectors. They could have just done Guinan separately, since we already had Dixon Hill, albeit in a different suit color.

I never saw this set at retail either -- this is one of those things aimed at TOS fans or completist collectors, which by that time there weren't a ton of. 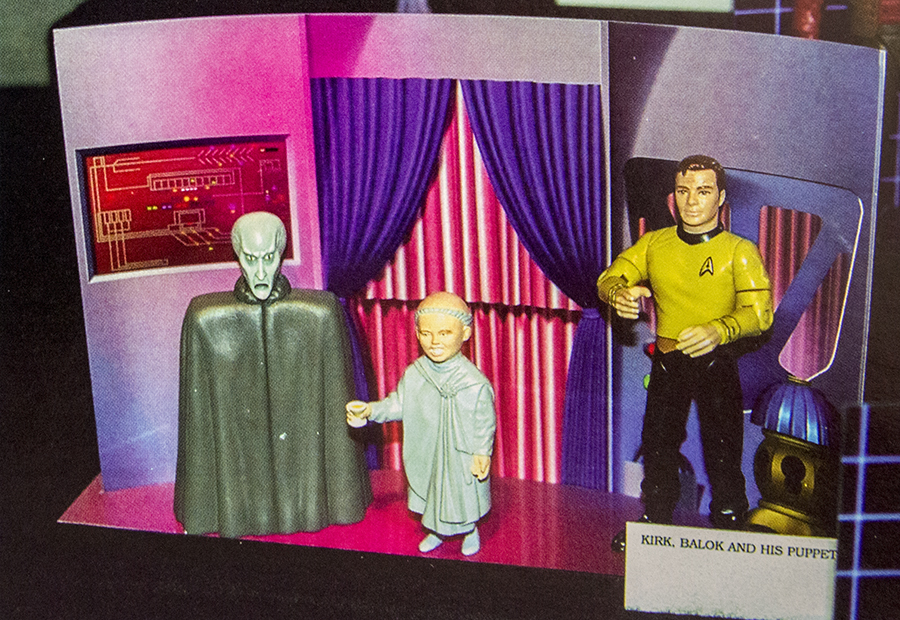 Another rare production set previewed, but the only exclusive thing here is the Data figure, cause Worf and Alexander had been done earlier as a two-pack. So, uhh, they just could have released the Data figure separately, but they wanted to make completist collectors pay for the whole 3-pack, which is kind of a cheap move on Playmates' part. 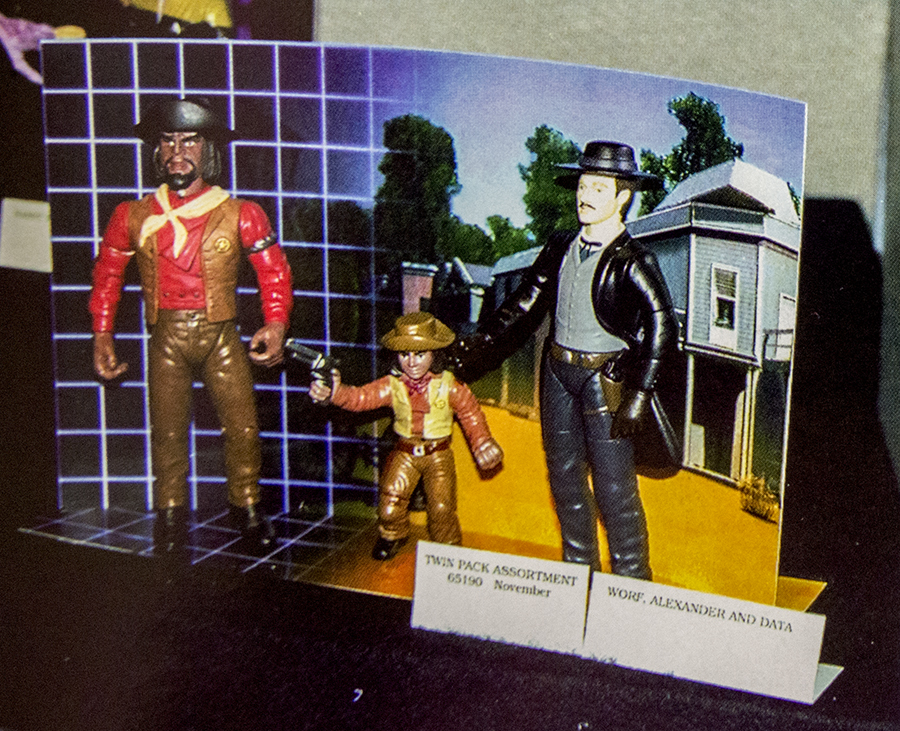 Referring to the TOS set,I think they were going to change the scale for the bridge figures. I probably would have taken the bait. All that set requires is a Turbo lift with McCoy and the Engineer console with Scotty. And 5 chairs, for gosh sakes. Oh, Except they would have to give them, functioning, seating pelvises!

About finding any of them them in retail... what are these words? Sadly Canada got the short end.
Thanks for posting, these are great to see! Wait, we did get the less articulated figures, at retail, but none of the multi figures.

Man these are great to see - especially another look at Bele - jeez I would have loved that figure!  Screw you, McKenzie Calhoun or whatever your name is!!!

I didnt see him, had to research the first photo. I thought he was going to be done...!

Ah the good old days. How I wish we could get just one more shot with Playmates Toys. I just know that the third time could be the one that really works!

By the summer of this year Playmates still had a mostly-decided "Star Trek: First Contact" lineup, with the Borgified Data present in the lineup, but with no Lily or Borg Queen (which is kind of a big omission).

By fall of 1996 the Borgified Data has left the planned lineup and Lily has joined it, seemingly at the last minute. But not the Borg Queen.

Lily appears to have been added only in the fall of 1996, as an indirect replacement for Borgified Data. The Borg Queen I guess they just forgot about, even though including her wouldn't have spoiled anything because she was present in the movie trailer by this point. 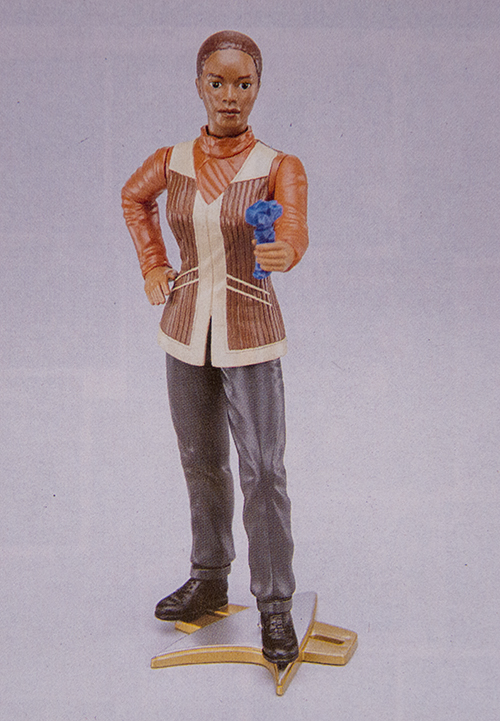 Publicity photo from the summer of 1995 for the upcoming lineups. Looks like almost everyone is having a great time as this cocktail mixer, except for Martia. 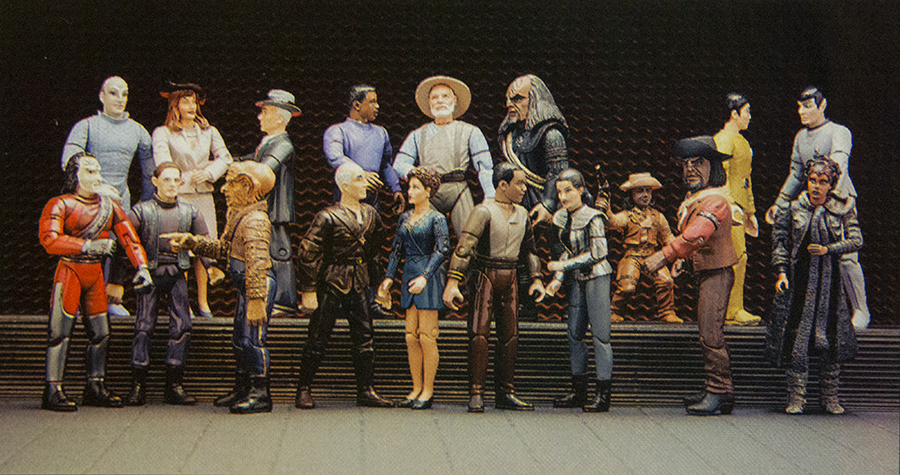 Here are the earliest publicity photos for the 1992 lineup, released around the time of its debut. 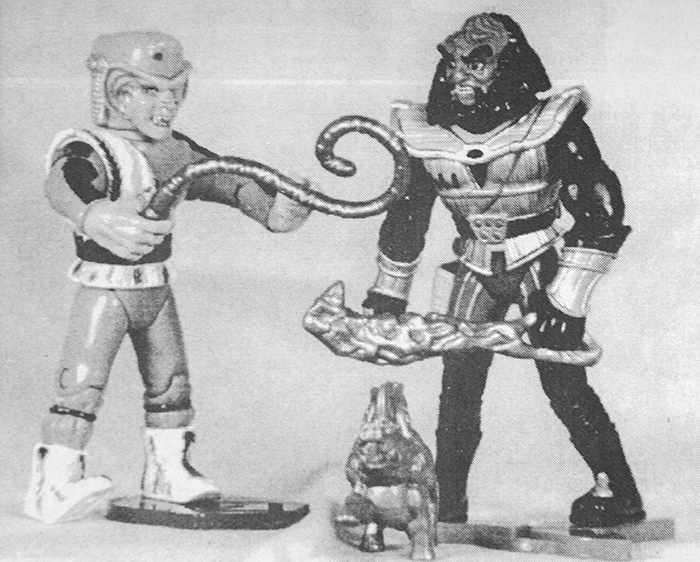 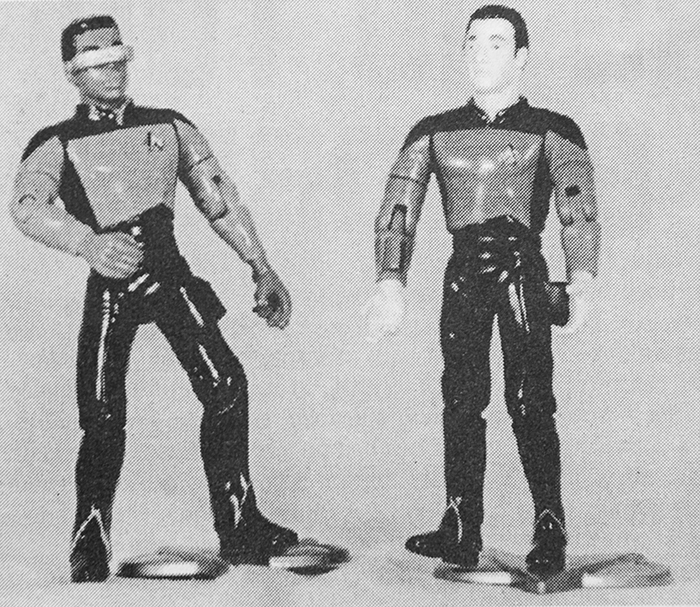 A group shot of the main debuts in various scales.

A prototype of the folding TOS bridge playset. 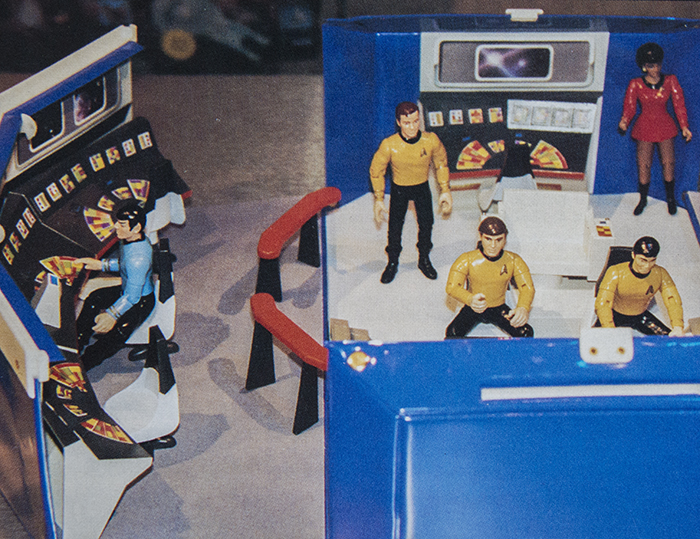 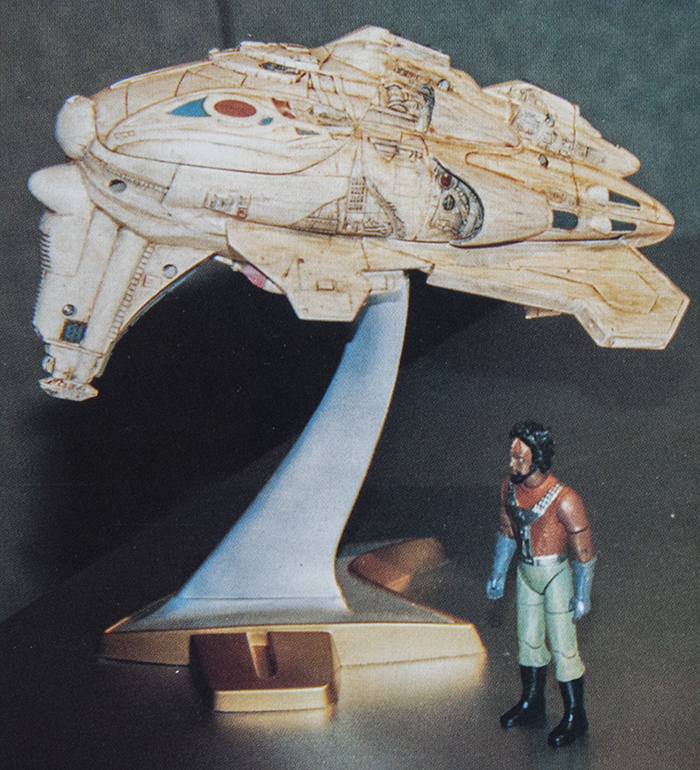 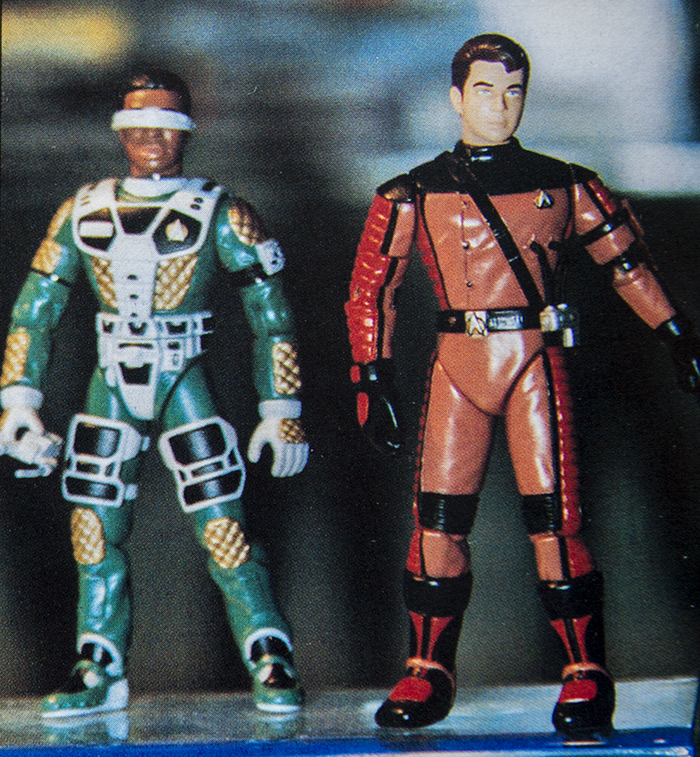 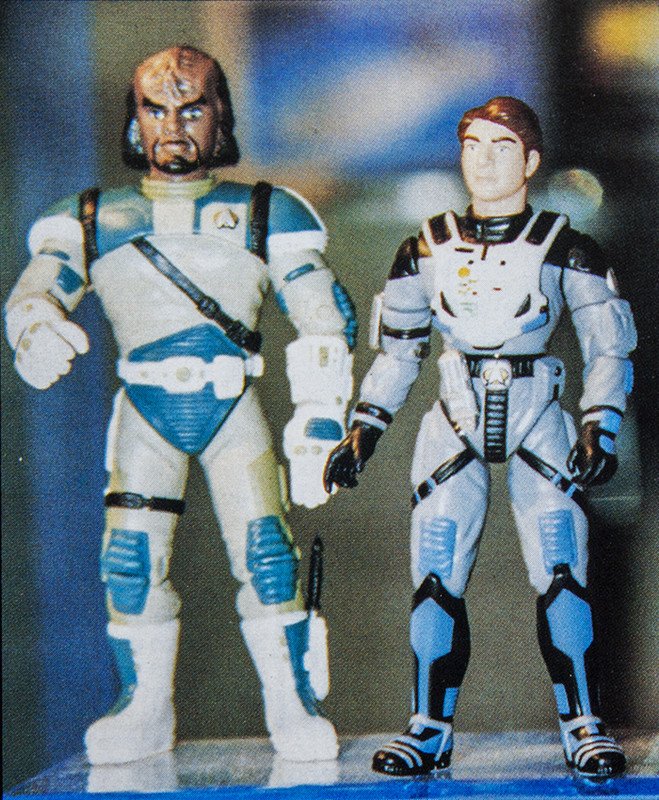 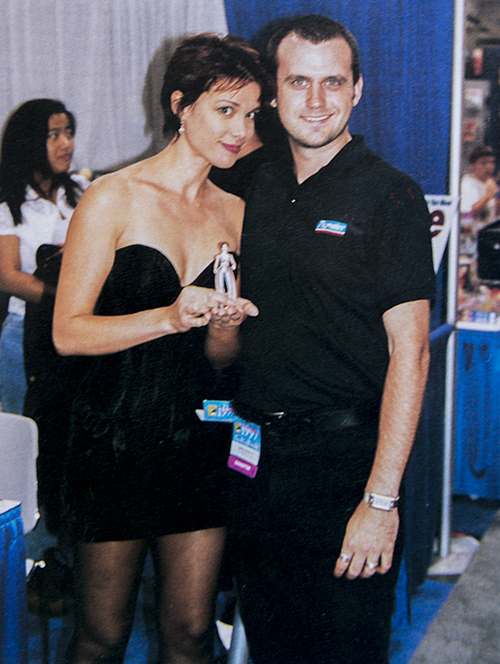 Omg I remember that picture in ToyFare magazine, in fact I still may have it cut out somewhere. I kept that picture in hopes that they produced the 4.5" Sisko and Zimmerman. Did you hear ir know of why they weren't produced?

The absence of this Sisko figure was not made clear, but I always thought that earlier in the same year they released the bald Sisko figure in the red DS9 uniform, and the 6-inch Sisko followed in 1998 with his USS Defiant chair, and perhaps that would have been too much of one character. So some costs had to be cut for whatever reason.

In hindsight I think that was a mistake, and a much more significant one than the absence of Dr. Zimmerman.

First up, here's a shot of the display, which was pretty expensive-looking by this point. A lot of new figures were shown at this event, and most of them ended up going into production. The major themes were the rapid expansion of the 6-inch figures after the First Contact lineup, an expansion of the 9-inch figure offerings, and the production of some obscure and non-obscure characters from TOS.

The major items from the 1998 display that ended up making production were the 6-inch playset figures from DS9, which came with their own workstations, but ended up being something of duds at retail. The 9-inch figures were all cleaned out by collectors who were into 9-inch figure, owing to their small production runs, as this had almost always been a format that immediately met the demand in a 1:1 ratio and didn't sit around on shelves.

The 1998 show also exhibited a number of figures that didn't make production for various reasons, and may have been cut simply because they exceeded some budget benchmark. 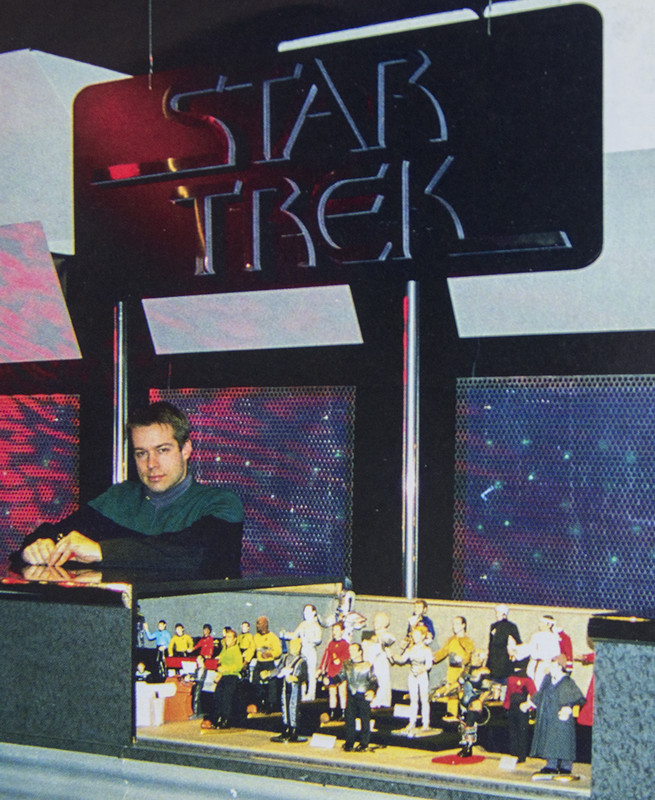 6-inch TOS figures. That's right: Kirk, Chekov and Sulu are 6-inch figures here, as the little card says, while Spock and Uhura are 4.5-inch. You can spot the different sculpts on the Kirk, Chekov and Sulu figures. These three would have been released with their chairs/workstations in September 1998, similar to the DS9 figures which actually made production. 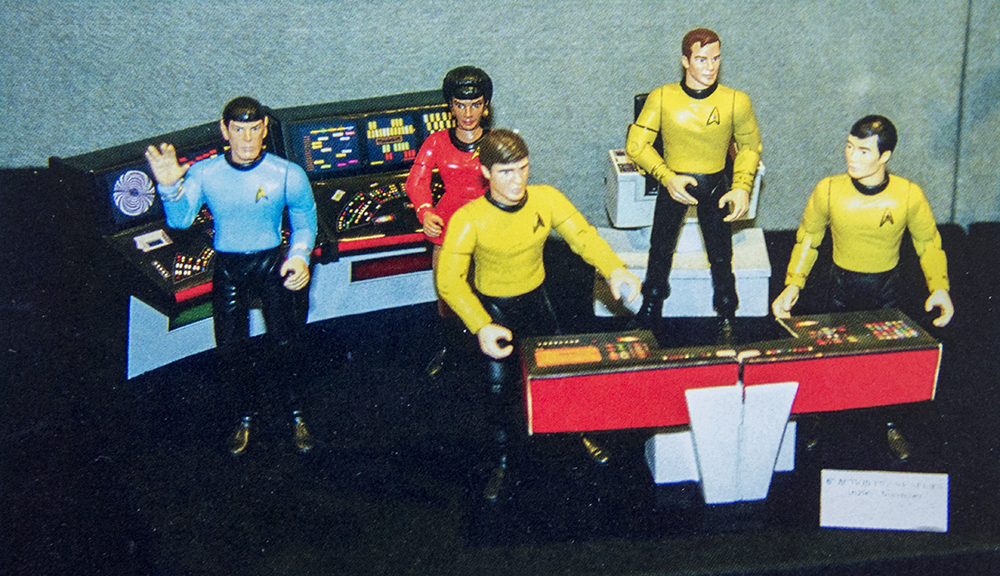 Here are the 6-inch DS9 figures, which made production and were released with their workstations. 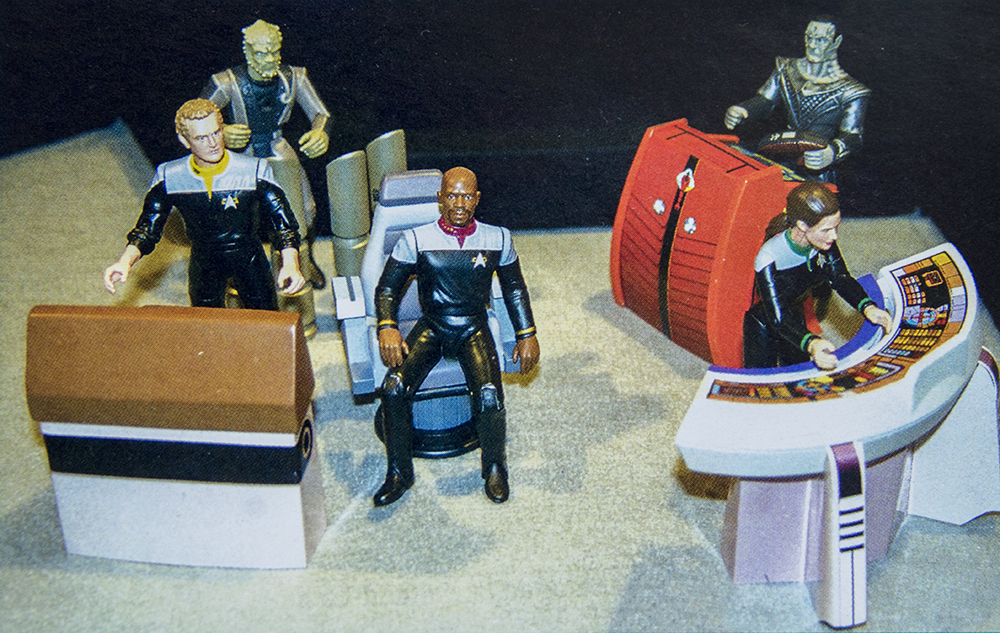 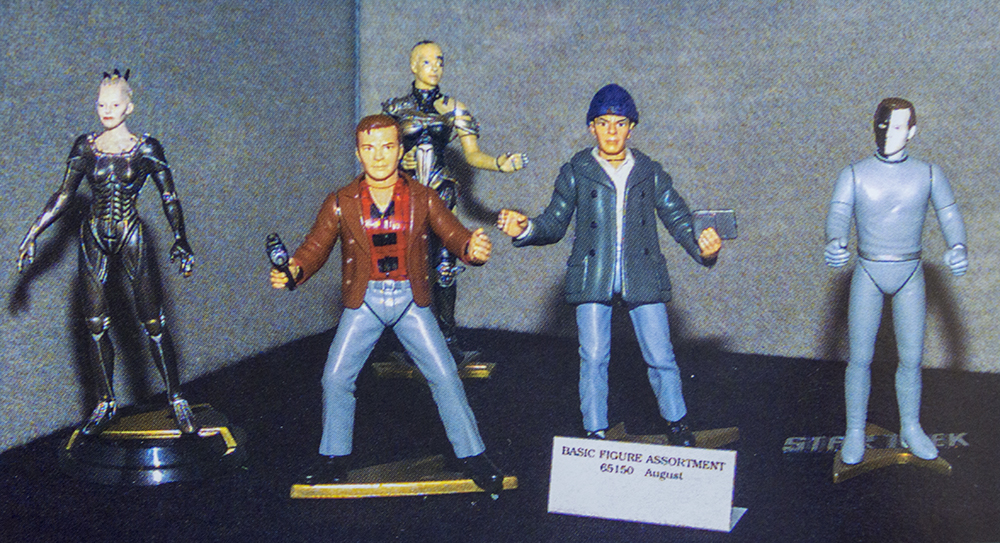 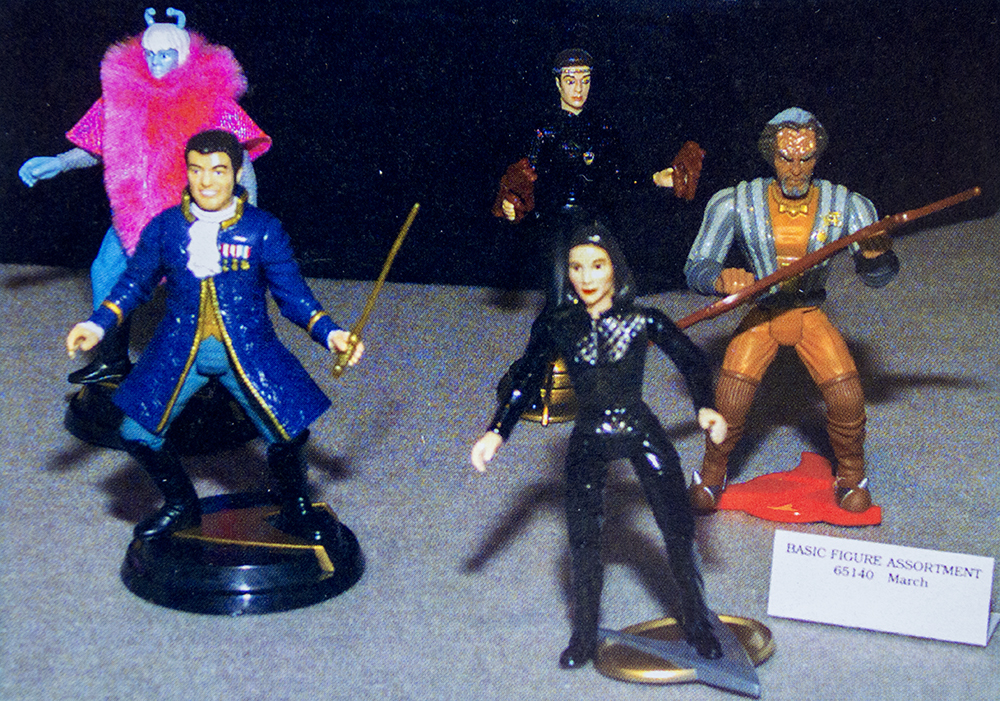 I never understood the reason for not releasing Bele. Simple enough figure that shouldn't have cost too much.

I never understood the reason for not releasing Bele. Simple enough figure that shouldn't have cost too much.

They kept getting simpler as the line progressed, too. If they weren't using the Starfleet uniform buck, they were cutting back on articulation to keep costs down.

Yeah, the weird thing about Bele is that they took out the articulation of knees and elbows, but I dunno why they scrapped the figure, other than because it was a super obscure character that you could only know about if you had TOS on VHS tape. But the same goes for Trelane and the Andorian.

I think doing Sisko and Zimmerman in FC uniforms would have been even cheaper cause those bodies and heads were already shared with other figures, so they were in effect already tooled up.

Note the Art Asylum Borg and Klingon on the far right. At this point in time Art Asylum was working with Playmates on some sculpts as a sub-contractor at first, before it acquired the license to produce its own lineup. These are the early days of Art Asylum here. 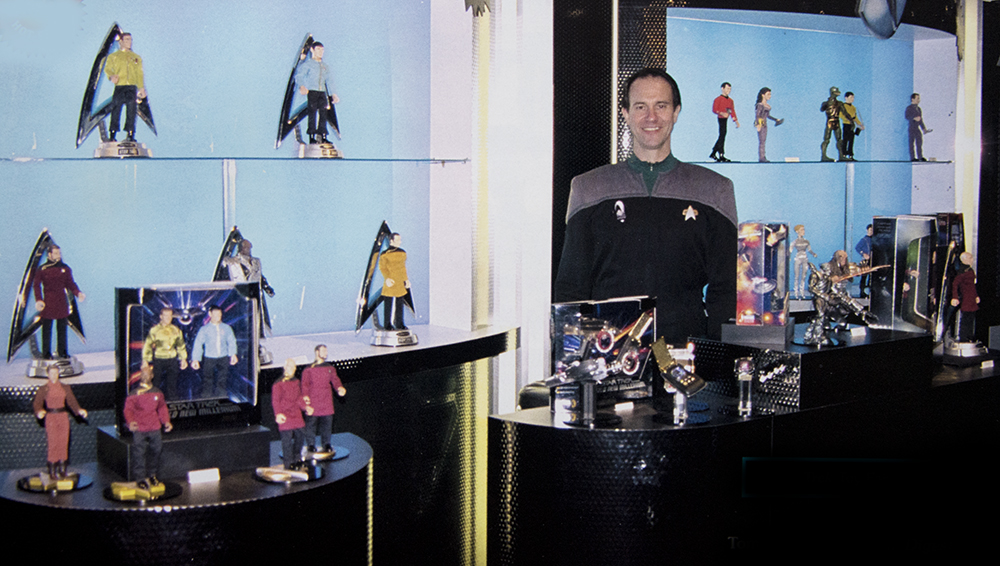 Star Trek: One Weekend on Earth - Huntsville, Alabama
On September 7 and 8, 1996, Huntsville hosted the now legendary Star Trek: One Weekend on Earth 30th Anniversary convention. This was a BFD, as our former vice president would say.
This was the summer of 1996, so sci-fi was at an all-time peak, First Contact was about to debut, Voyager and DS9 were on the air, and Star Trek was celebrating its 30th anniversary. Looking back, this was really a Peak Trek moment in time, the entire year 1996 one could say, and Trek fanaticism was at its absolute maximum. The two-day convention drew a lot of Trek actors -- the majority of the casts of the four series. 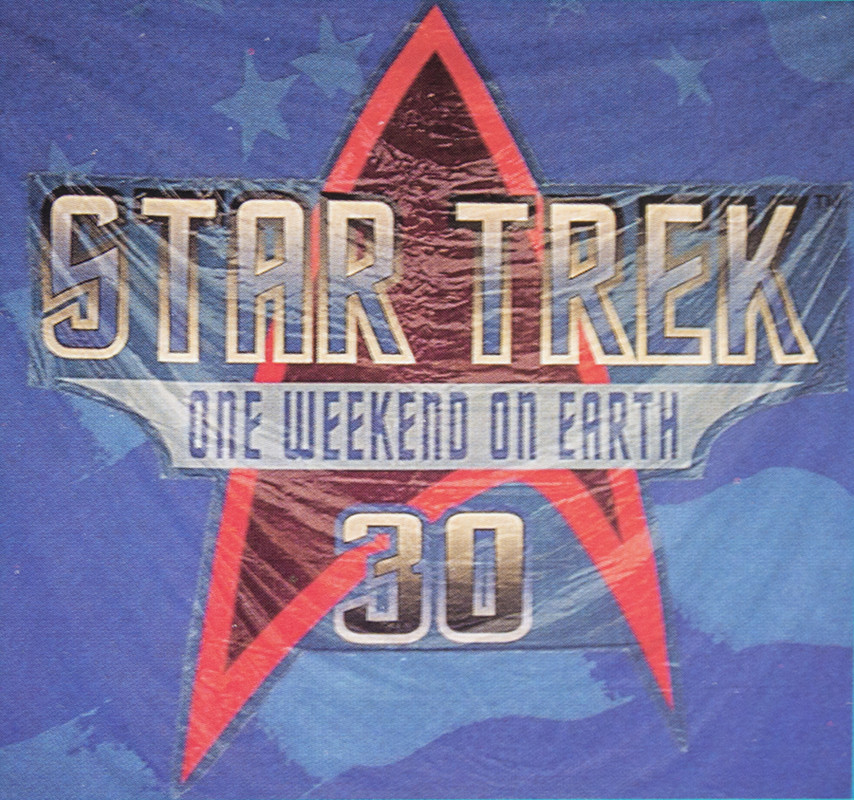 Huntsville was not the easiest or the most obvious choice, as opposed to Los Angeles or New York, so pretty much everyone had to fly to Alabama. The city itself had a big role in the early U.S. space program, so that was the thinking behind this choice of location. 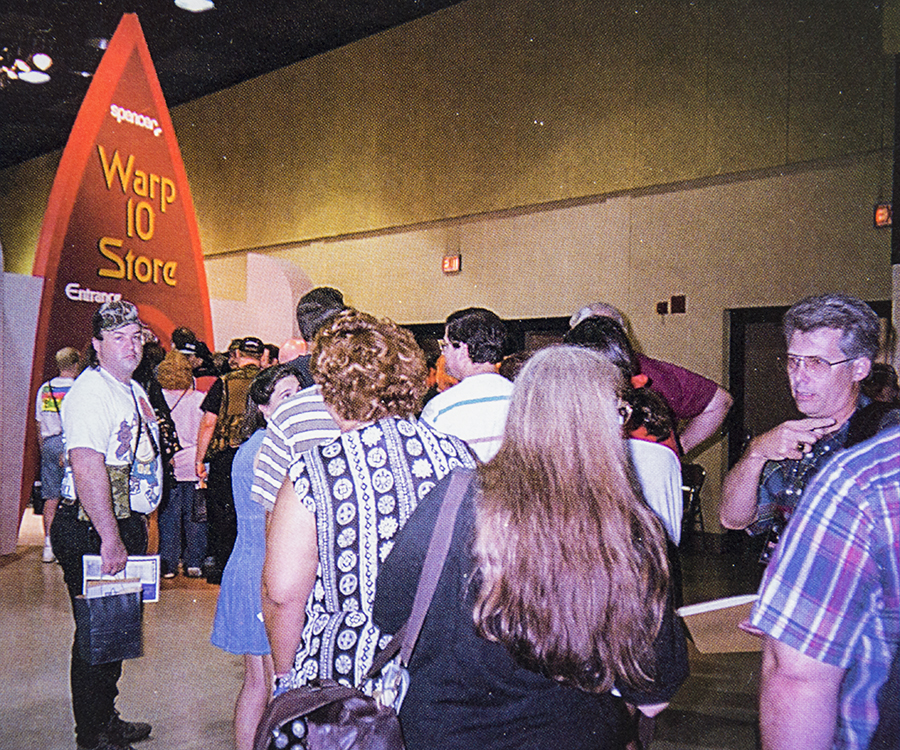 Playmates had its Warp 10 store set up at this convention, of course, and it brought the two Sulu and Scotty exclusives to the convention. The collector response was absurdly high, as one would expect, because no one wanted to miss out on the next Red Data, so there were big lines to buy them. Of course, many people got multiples because they were with family members, and then bought a few more from other people in line. People were walking around and reselling them because there was a limit of 6 figures per person, as the marker on the case says. Of course, if you wanted 60 instead of 6, this was easy accomplished at the convention with a little bit of work. 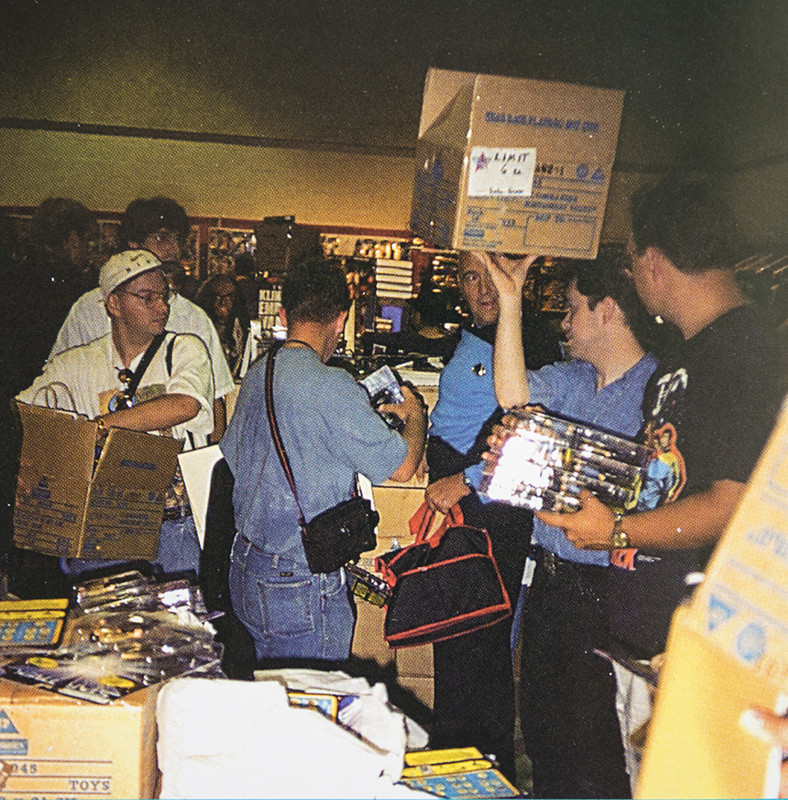 The end result was that the vast bulk went to scalpers and collectors, who stuffed their cars full of these figures, and they immediately hit the secondary market for hundreds of dollars a pair.
To this day, I think, the vast majority remain in their boxes, just because so many scalpers and collectors got them as investments. In the years that followed the big collector shops around the country would have several of these on hand at any given them, and people posted classified ads various magazines asking like $150 for a pair. Still, demand was strong even at these prices, because Canada, UK and Australia did not get these at all.

In hindsight I think Pmates may have thought that it should have produced a greater variety of convention swag, like another 20,000 figures of some simple headswap variety like Tapestry Picard, (Spock in Wrath of Khan uniform, for example, using a head and body that already existed) because all 20,000 would have been bought in a matter of hours. This was very much a fish in a barrel opportunity to sell collectible stuff.
The 9-inch Target exclusives, among other items, were also shown at the convention. 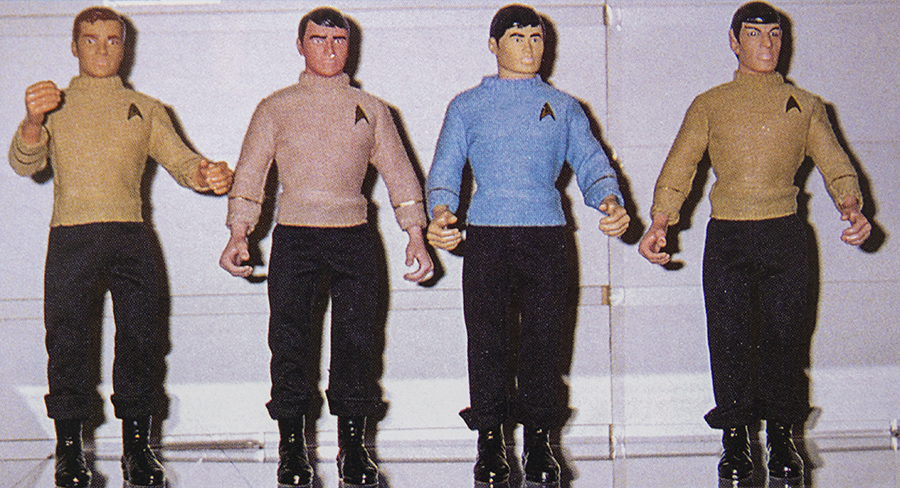 A button from the Warp 10 store.

That's what killed my enthusiasm for the line. When I learned how difficult those figures would be to get, it took the wind right out of my sails. While Playmates Toys gave me some truly unforgettable memories, they also did a terrific job of ruining the hobby with exclusives like this.