20 replies to this topic

Here's a pretty impressive one spotted on eBay, just due to the rarity of the figure package involved: Canadian Lwaxana Troi with Tasha's SkyBox card.

I should note that Tasha was available with this backer card as well with a SkyBox card in Canada, though with a card-on-left tray arrangement. 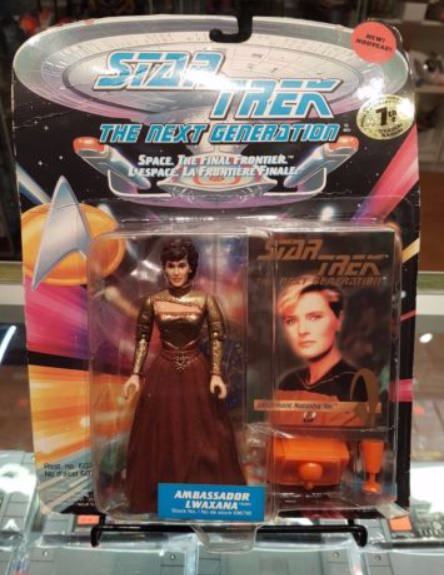 Thats the kinda thing FHC used to really like!

I once had a Deanna Troi with two left lower arms (and therefore hands). Man, that bothered me. I used to display her only with her hands behind her back

That's impressive. Like 99 percent of the errors are stuff like mismatched or missing skybox cards, pogs, and backer cards.

I always wondered if she might be worth something. Then again, being a Kid, I took her out of the package anyway (in fact, I didn't notice the error until I held her in my hands). And later on I "fixed" the error myself

I have an entire section on display of errors. Prob 30 + easy. Here was one it took me a second to catch.

Do you want to unravel the mystery?

I think it is a regular Data head on it vs the smiling Lore head.

Here's a pretty cool one, and also let's recognize the fact that DS9 had very few errors, compared to the 1996 lineup and the Voyager lineup, which was swamped with them. 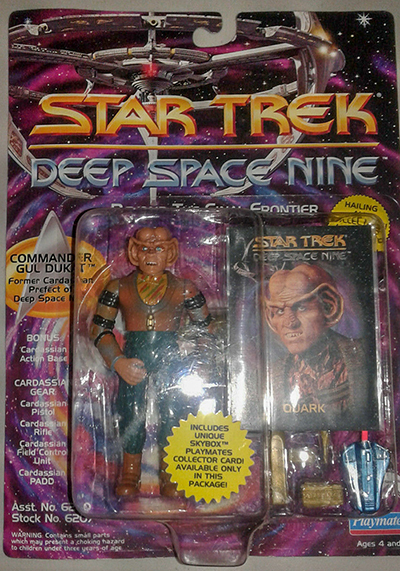 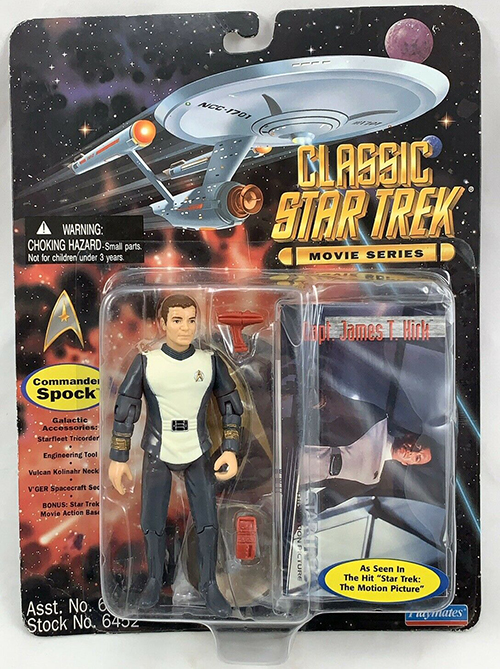 After working in manufacturing for 25 years, I have to wonder how many of these errors were intentional.

One year, we had a mandate to cut obsolete inventory. One of the execs made a decision to put the previous year's Power Rangers product in the current year's packaging just to get rid of excess inventory. So while the box said "Dino Thunder" the contents were "Ninja Storm."

It's not hard to imagine someone at Playmates' factory level saying, "We've run out of Kirk backers but we've still got these Spock cards. Instead of printing more Kirks let's just use what we've got."

Yeah, I think there was quite a lot of that, but in a more organized fashion: the DS9 figures on TNG 7th season cards, for instance, seems like the result of having run out of one type of card.

Here's a pretty interesting error that I hadn't seen before: this Khan figure was sealed with two accessory trays, so it has double the number of accessories inside. Pretty nice bonus, I'd say.

Somehow it all works, in that there's room for two equipment trays inside. I would not have guesses that this would be easily accomplished. 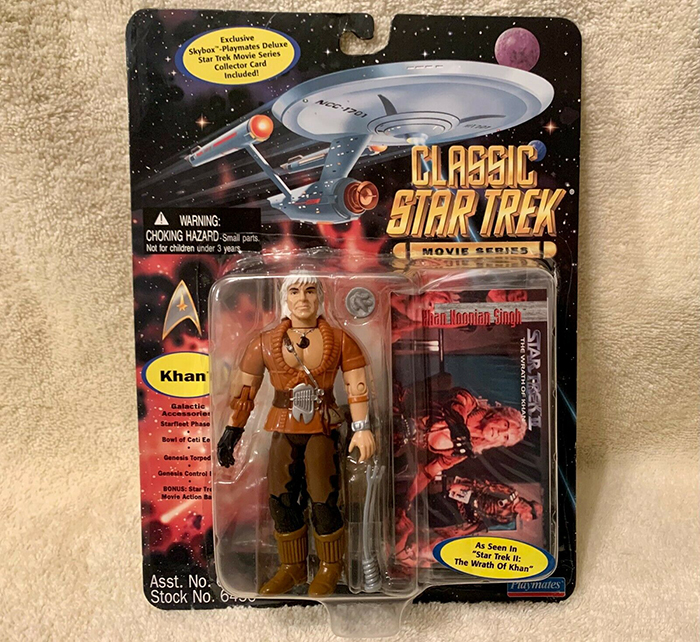 This 1996 line seemed prone to card errors, along with the first Voyager line. Here's a Talosian figure on a Pike card.

The Pike figure, on the other hand, is famous for not having a SkyBox card in some very noticeable percentage of instances. 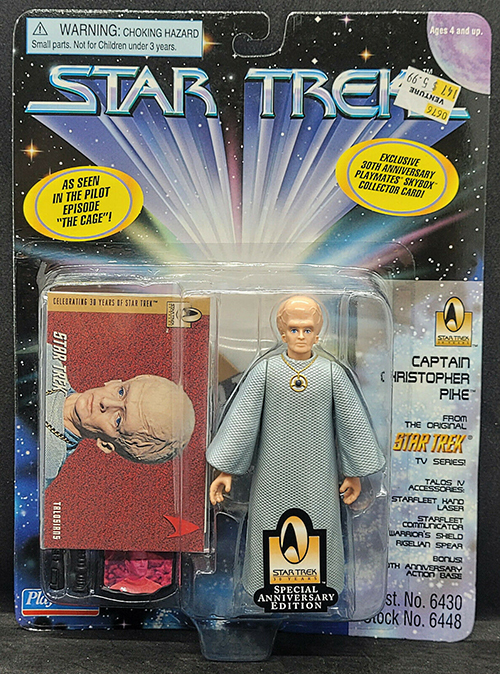 Here's a Seska on a Sisko card. This lineup had quite a lot of mixups it seems, more than the others. This one also had a bunch of figures with absent Skybox cards at times, notably Pike.

Errors in the 1992 lineup, by comparison, were.... actually pretty rare. Same with the debut DS9 lineup. 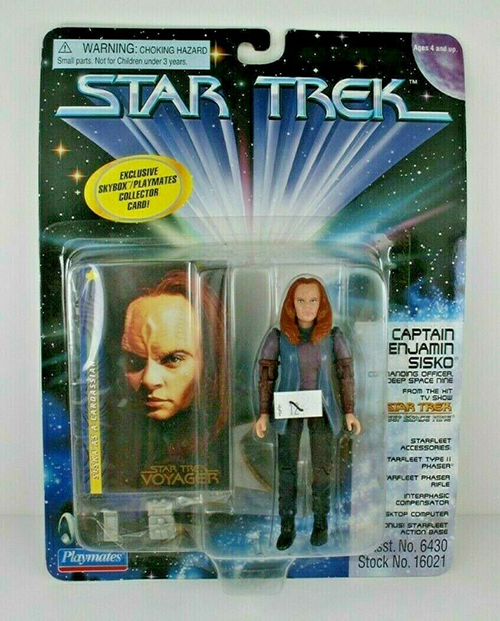 Here's an error that I would say is actually a legit variation, since there were so many of these. I've seen a bunch of these at retail when they first came out, and their numbers at the time appeared pretty substantial -- it definitely seemed like over 5% of all Janeways that came with the Torres card.

What's more, inside you'd get like two or three Skybox cards, and one of them would be Torres and the other Janeway.

There are still a lot of these on eBay, so they're not even all that rare -- that's how many of these are out there. Of course, we can only really judge their percentage from what people saw at retail, and it was pretty substantial how many of these were shipped this way. Perhaps as many as 1 of 10.

However, the Torres figure itself did not have the issue of having other characters' cards -- at least I haven't seen one that I remember.

Just how valuable are these? ::sigh:: There are so many for sale now that... I can't really say that they're worth more than the normal Janeway, despite sellers wanting like 3X money. Of course, Janeway itself is now a hot figure, and had been for a few years. 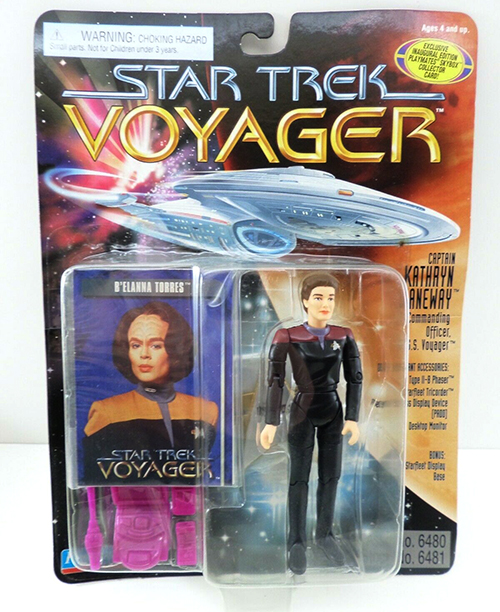 Here's an interesting type of error I'd never even seen before: Kirk in the blister, but facing away.

This is pretty rare even among other action figure lines, compared to things like cards from another figure.

If there is one type of error that seems to not happen with Trek figures often it tends to be goofs with accessories: missing accessories, wrong accessories, etc. There are some, but not as common as wrong backer cards. 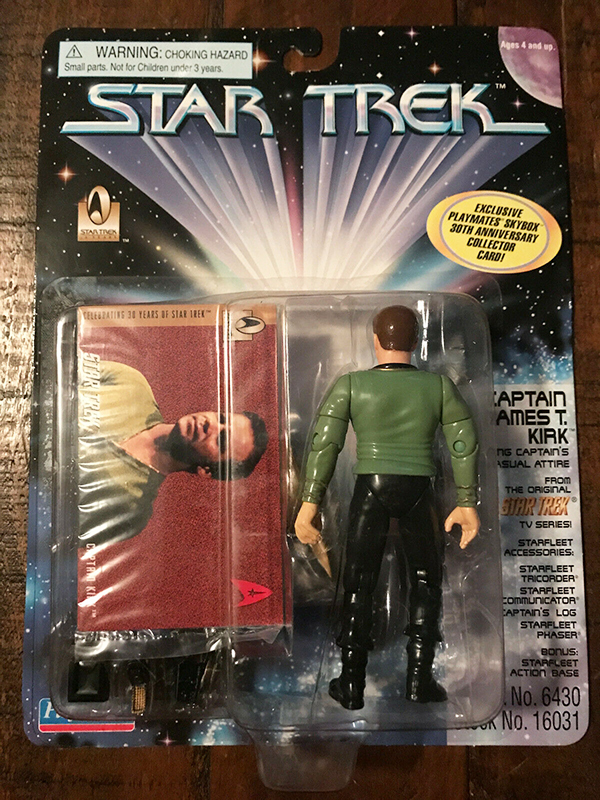 Here's a relatively rare, for this release, error figure, and it's once again the wrong card. I've only seen a handful of swapped card errors in this release, and virtually no Skybox card goofs, like missing cards or wrong cards. 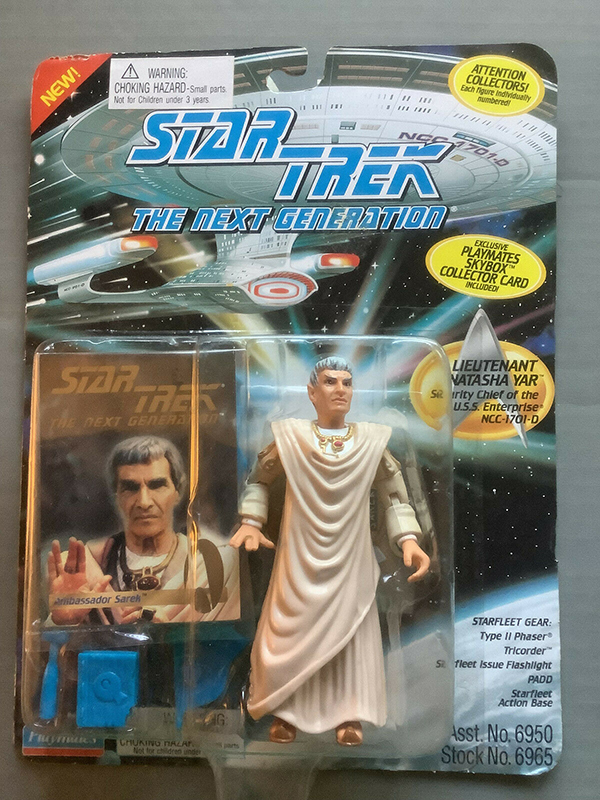 Here's another Sarek, this time Canadian, and an error that I don't think I've seen before: an upside down card.

Yes, these were released with pogs and with Skybox cards in Canada on 7th season cards, but of course the pogs were rarer at the time and quite pricey, usually around $200-250. Skybox card variants are now kind of difficult to find themselves, because they weren't really stashed away all that much. The Skybox card, you might note, has a window for the card on the opposite side of the pog version -- that window would be on the right. 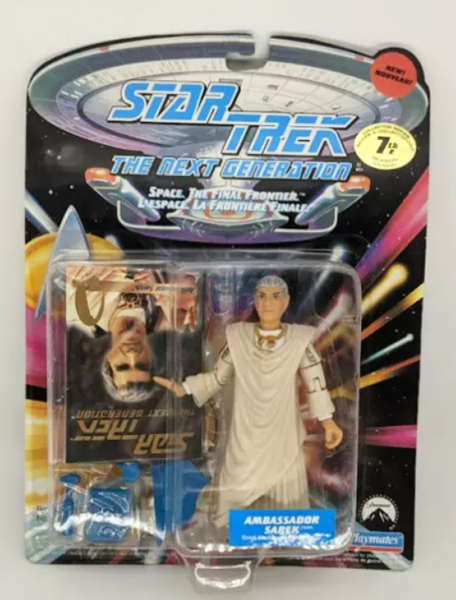 The cardless Pike is one error that I would say is actually a variation because the proportion of these is so high, somewhere around 1 in 10. I remember seeing these at retail when the figure just came out, and still even today if you look around on the various auction sites, there are still a lot of these without a card.

All the other figures from this release that happened to be seen sometimes without cards are far more difficult to spot, but there are some cardless errors in this release. Just a much smaller population.

It's important to remember though that some figures were without cards entirely, like TMP Spock and few others that were just weird like that: Thomas Riker, Red Data, Wesley in red starfleet uniform, and a handful of others.

If there was a somewhat distant second-place finisher in the error-thats-actually-a-variation, it's the Janeway figures that feature B'Elanna cards. That was quite an easily-found thing back in the day at retail, and still is today. And some sellers want like double the money for them, which I think is unwarranted because there are so many like that, something like 5% at least. 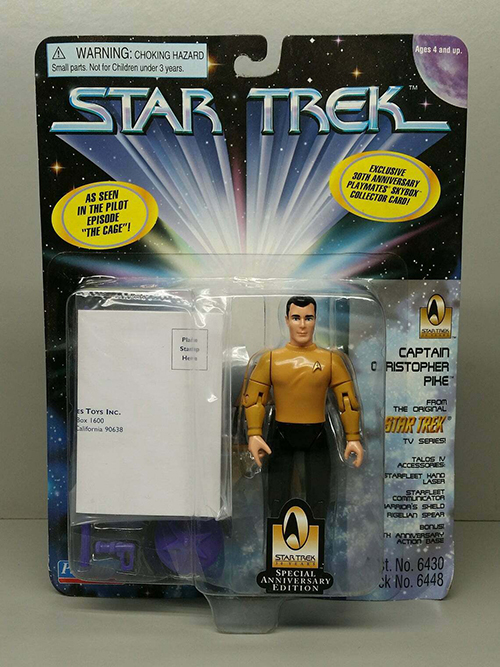 Also tagged with one or more of these keywords: figure, error, package