Just a second, I am now being told by our correspondents that that is in fact Elrond of Rivendell, not Legolas of the Woodland Realm as has been reported earlier. And that is also clearly Veronica Mars (who knew?).

But all jokes aside, this is shaping up to be a pretty diverse cast.

Actually, the big bit of news today is that Frakes, Sirtis and Jonathan Del Arco, who played Hugh Borg, aka Third of Five, will appear in the series at some point. Sirtis confirmed it on Twitter today. Does it feel like this is shaping up to be a very Borg-themes series? There's a lot of Borg stuff in the trailer for it to be just a B-plot theme of some sort. There's Picard on Earth, some more Picard in space, some cast members, but the Borg Cube is kind of a big hint. But there are also a bunch of Romulans in this thing too, so that could confirm the early talk about the destruction of Romulus.

Well, if it turns out to be Borg-centric, that's at least a good reflection that the producers know what plays well with a TNG audience.  I think the TNG film series could have easily done yet another Borg film right after FC and not lost money. Perhaps I'm in the minority with that view.

But anyways, good to see costumes from Lord of the Rings getting some airtime, hehehe. 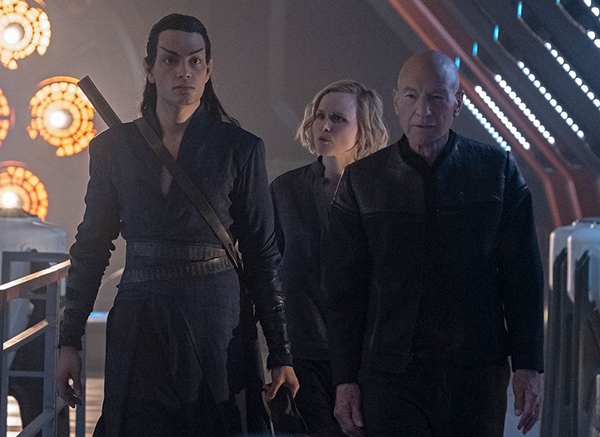 The Romulans are on the cube, no doubt salvaging and studying the technology, so its probably both a Romulan and Borg story.

The countdown comics said the Romulans used Borg technology to refit the Narada into what we saw, so that cube could be the source for that tech.

I actually like what Im hearing story wise... and this actually sounds like it might make a great movie... maybe even a great trilogy. In that spirit Id say maybe they have 5-6 hrs of good story telling... this should really be about 6 episodes... my concern is that to fill 10 episodes they will do what a lot of net shows do and draw it out with poor writing. This has been the bane of both seasons of DISCO... though admittedly the plot seemed to wander a bit through both seasons... hopefully they nailed it all down and write it in advance so it doesnt suffer.

I got teary eyed, not gonna lie. Never thought Id see my captain and childhood role model come back. The bitter taste left by the end of Nemesis might finally go away.

Hoping the writers nail this one! I hope the Enterprise E is still around somewhere too.

"If she is who I think she is...she's in great danger"

Seems weird that Trek would be making some individual character out to be so important as to get Picard out of retirement, this isn't Star Wars where there's "one prophecy" etc.

They need to fix Data's lips if they are doing CGI because that's the one part of him that looked pretty darn old, with one side disappearing on him faster than the other.  Also, is it just me or do his yellow eyes look way more creepy than they ever used to now that they are in full HD?

That's an interesting point, I hadn't thought about it that way. Is this someone we could have already seen or heard referenced?

Ive seen a couple people suggest it could be Lal. I dont know how, but its an interesting idea.

The Romulans are on the cube, no doubt salvaging and studying the technology, so its probably both a Romulan and Borg story.

The countdown comics said the Romulans used Borg technology to refit the Narada into what we saw, so that cube could be the source for that tech.

Given that there's a comic trilogy tie–in called Star Trek: Picard – Countdown coming out prior to the series, (as well as a novel,) this seems like it's almost a given. You don't do another "Countdown" comic if you're goal isn't to reference the first one. Given that the novel is called Our Last Best Hope, a nod to one of Abraham Lincoln's speeches, and it appears that the Romulans are enslaving former Borg Drones, I would easily believe that this series is going to be a Romulan and a Borg story. Most importantly though, Picard's two most life–changing incidents involved the Borg (Assimilation) and the Romulans (Death of Data,) so having to confront both of them simultaneously seems like the perfect scenario for Picard to deal with.

I actually like what Im hearing story wise... and this actually sounds like it might make a great movie... maybe even a great trilogy. In that spirit Id say maybe they have 5-6 hrs of good story telling... this should really be about 6 episodes... my concern is that to fill 10 episodes they will do what a lot of net shows do and draw it out with poor writing. This has been the bane of both seasons of DISCO... though admittedly the plot seemed to wander a bit through both seasons... hopefully they nailed it all down and write it in advance so it doesnt suffer.

I believe the plan is three seasons if the first one does well based on comments Sir Patrick Stewart has made, which is how you'd get your Trilogy. I'm actually not concerned about the ten episode count. There's a lot to pack into the first season alone, (just look at that trailer, there's so much to tackle there that I'm almost worried that 10 episodes might not be enough to cover everything they need to without rushing some of it,) that I doubt this will drag. DSC has suffered because its writers haven't used their episodes efficiently. The first three of season one were absolute disasters, and I'd go as far as to say virtually everything outside of the mirror universe in season one was a disaster with the exception of the Harry Mudd episodes, one of which was effectively a standalone episode proving that the plot for that series might have been better with less serialization rather than more. Season two's problem was the revolving door in the writer's room; it's so obvious if you watch DSC S2 again that what they ended with clearly wasn't what they started with. Early on it looked like the Red Angel was going to be some sort of myth that Michael had heard of and forgotten about. Then, as the show got further in, the whole plot with Control sort of came out of left field and the entire season turned into something else. For awhile it felt like they forgot about Terralysium, before referencing it again almost in a "hey wait, we have this thing we need to address" type of scenario. This bugged me because they could have moved things a long a whole lot more smoothly and had plot points feel more natural instead of seeming forced. I don't think "Picard" will have this issue though, they seem to be handling it differently, and Kurtzman himself has suggested he wants the pacing to be different from DSC, more in line with TNG, but also not outright identical, which is good given that Picard is clearly meant to be different from TNG.

I would love to see this series really outdo DSC. If it does I think we could see this time period get the focus it deserves going forward once it becomes obvious to the studio that the fans who've been clammoring for something like this have been right all along and that going forward from here is where Trek's future is. (Then again, I also think DSC needs to spend no more than a season in the 33rd century and should ideally wind up in the timeline of Picard when the time comes to wrap DSC up.)

Stewart, Spiner, Frakes, Ryan, Chabon, Goldsman....what else could we ask for? Im holding my breath. Watch!!

A tear started to swell up watching that!

Love that he named the dog #1!

And with all the old faces it feels a bit like coming home!

I let my AA sub lapse... will look at renewing in Feb when this is on.

First of all: very off-the-shelf furniture, esp that chair undercarriage. I think the props dept just bought all of this in an IKEA in an afternoon. 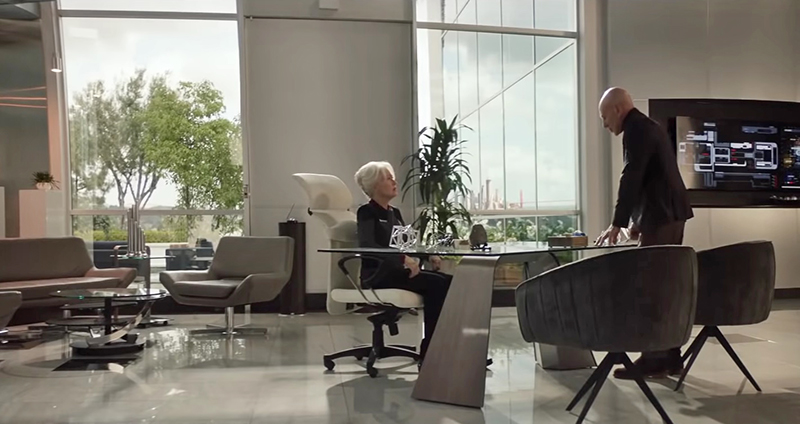 Oh hey, I was gonna ask, who's the guy who says "You really wanna go out into the cold?" Do we know him? He seems familiar.

So is it now time to hypothesize that maybe the grand plan is for these events to tie into Discovery S3+?  This girl is "the domino" etc etc?  Picard is the one who managed to keep enough of the Federation together to last until Burnham can piece it all back together?  Etc, etc?

Also, as far as the furniture, just explain it as that woman decorating her office that way because she has an affinity for the aesthetics of 2019.  *shrug*

That ship is one of my favorite designs, and I’m thrilled it’s pretty much an official canon ship now. Hopefully we see one properly on screen at some point.

Here's a look at Hugh in the new Picard series:  https://tvline.com/2...athan-del-arco/

I have to admit I didn't expect him, out of all the TNG one-episode characters, to come back, yet here we are.

Also a very underrated action figure from that lineup.

ONE WEEK TO GO, PEOPLE

Can't shake this feeling that the girl is somehow related to Data.  IN THREE DAYS WE WILL FIND OUT.  Or probably not, they'll probably make it some protracted mystery that disappoints us once we find out 5 seasons later.  As is the way of shows now...

What if she is Picard and the Borg Queen's child?