He got it from Eaglemoss through his subscription, he told me. He must've subscribed quite early on, methinks.

No fair. I'm thinking I should move to Europe. They are getting movies first these days, and now this?

I still haven't received mine... Anyone else?

End of the week/month my ass. I think I'll call them again tomorrow.

Don't come to Germany then. Prometheus for example won't be shown over here until mid August. And it's in theatres everywhere else in Europe...

Can't wait to see some nice, up-close pics of these! I am really hoping they make it over to North America somehow. I wonder if people import them if they can import the subscriber bonuses too. I'd like those as well.

QUOTE (JonWes @ Jul 7 2012, 02:35 AM) <{POST_SNAPBACK}>
Can't wait to see some nice, up-close pics of these! I am really hoping they make it over to North America somehow. I wonder if people import them if they can import the subscriber bonuses too. I'd like those as well.


I'm stoked, too.
With the Star Wars starship partwork, the subscriber bonuses were not offered to North America, sadly. Or to non-subscribers anywhere. But a few have turned up on eBay.

Speaking of eBay, the Romulan Warbird has turned up as Issue #5, so the NX-01 was indeed #4. 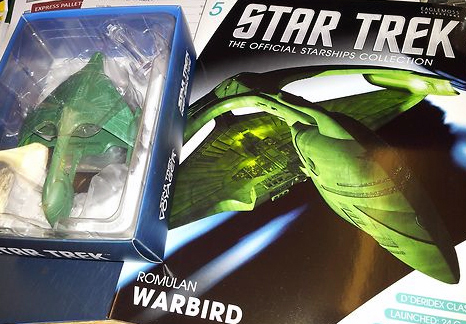 I phoned them on thursday, and they said they hadn't sent out any issues yet due to a stock shortage!

On the plus side, these models look really sweet!

Yes indeed, they do look sweet!

Some more mixed news: my pal Boris from the RS forums posted:

Today, my contact in the UK (who received all 5 issues) sent me the letter he just got, it's posted below.
So it looks like they floated the first 5 issues as we suspected they would, and now they've "paused" subscriptions while they ramp up production for a proper roll-out. BTW, the dude told me that he did not receive any of the "free" ships. I thought the AGT Ent was supposed to ship after the 3rd issue, hmmmm.
It could be a few months until they're back on shelves or being delivered again. If I hear anything more from him, I'll let youze guys know.
I'm still waiting for my #1 to arrive, too. Don't know what happened to my package, hopefully it's just delayed by the Denebian Slime Devils at Customs. Harrumph.

Well, your sources certainly sound a lot more positive than that letter does.

Thanks for all the info!

Well last night I finally got my 1st issue, issue 3. This is the Klingon Bird Of Prey and it looks excellent.

Inside was a little typed note saying :-

Due to demand we are currently out of stock of issues 1 and 2. As soon as they are available, they shall be sent out.

I haven't got the note in front of me, but this was basically the gist of it.

Ooh, I'm away from home - I wonder will it be waiting for me when I get back?

Any chance of some pics, Matty-lad?

This is just fantastic news that after 45 years Star Trek still pulls in a crowd of people. Excellent

Right, well, it's been at least 2 months since I subscribed, and I got nothing to show for it.

So how did you get on then? I've just got back off my honeymoon and have now picked up issue 2 from the post office. I agree it's getting annoying. I've now only got issues 3 and 4 even though money's been taken out.

I actually forgot to call them yesterday and today, I was busy.

At least one of us is getting ships out of this. Could we see some pics?

Hope you enjoyed your holiday!

Right, a Reddit post by someone who received their Enterprise-D has motivated me to hunt down anything I can on this publication.

First, the Enterprise-D is exceedingly pretty: The BOP is a little less impressive, though:

The main body is under-detailed and a bit doughy-looking, but the wings are nicely detailed, as is the engine section. The blogger confirms that they are not articulated, though.

I spotted that one on this dude's blog.

The D really does look very pretty, can't wait for them to release the mag country wide, and BOP looks quite good too. Nice that the wings are fixed in flight mode, most BOP models seem to have them down. I wonder if the D saucer seperates?

Not much news here: the Eaglemoss site is not accepting new subscriptions: a pop-up now says "Coming Soon!" when you toggle the Subscribe button. I'm not convinced that this is a good omen but others are more optimistic that it's just a brief pause before the national roll-out and that Eaglemoss' stock sold much better than expected. Guess we'll see if Eaglemoss' "will quite likely continue" turns out to be the case.
I have read that issues #1 to #5 are now starting to trickle out to UK subscribers in greater numbers, that's good news. But still no news of issues beyond #5 yet.

I don't think that the D's saucer separates, no one's mentioned it, anyway. Then again, Eaglemoss didn't mention that some of the ships have zamac/white metal parts, either.
My Ent-D never arrived (lost in the post, apparently) but I got a refund from the eBay seller. But I'm quite bummed out about it: it looks so nice. I had reserved some choice shelf space for it but now there's nuthin' but vacuum. So despite my efforts, I'm in the same Pit Of Despair as many of youze guys.

BTW, sorry I didn't post that issue contents/bonuses info here at TTF. Thought that I had, my bad.