The entire culture of convention exclusives (of all kinds not just Star Trek) continued for years... and I'd gander that it wasn't until the last 8-10 years that after market demand settled  down a bit ... not that it died off, but once manufactures found that they could really sell the exclusives on-line as well as at the convention, many more people were able to get them at more reasonable prices.

I want to say that the last couple of years I haven't even been interested in any con exclusives from SDCC... which kind of amazed me... and I think thats the second aspect, manufactures have tended to try and either skew toward items that might not be "must haves" or they release them as a re-paint, which again many collectors don't feel incomplete. Gold Star Trek ships are like that for me. Nice con exclusives... maybe I get one maybe I don't.

The non-existence of eBay back in 1996 made a huge difference for this Huntsville Scotty & Sulu pair, but even then the magazines were full of ads for them immediately, because there were so many of them. People felt that if they didn't get them then they would only balloon in price, and for a while this was true. But then The Great Collapse of the early 2000s brought their values down to earth, because the run of the Huntsville figures was pretty big to begin with, and they all stayed in their packages.

It was like the Theater Luke phenomenon, which had a 150K run but commanded well over $100 despite it. Once things settled down, they were plentiful.

Yeah, the collectible figure market... as well as comic  books went through a boom to bust crazy back in the 90's and early 2000's

I watched this documentary on baseball card collectibles... and it was kinda sicking how the manufactures were in on grifting the public.

Basically I've never really "collected" things for the monetary value... but rather the enjoyment of the franchise... or even the items themselves.

People had treated that period in time, and action figures, as if nothing had ever gone out of fashion before and as if it was impossible for figures to be worth less in the future. There were shortages of many figures at the time, but now that eBay has 20,000 Star Trek figures on offer at any given moment it's clear that a lot of people were panic-buying and stockpiling figures in basements, as if they'd gone mad, hoping to buy a car in 20 years?
This hobby is for fun, this is not for making money and buying a Sea-doo. Even back in the 1990s, would any profits from intense figure collecting have covered a mortgage payment? After a year of flipping figures in one's spare time by posting tons of classifieds in action figure mags (which costs money), before eBay, you could buy a lawnmower, but... there are easier ways to make that money.
As an investment, figures are such a small item that's hard to retail them in the best of times, so unless somebody got a whole case of Tapestry Picards right then and there, you're better of buying bonds or something. At least there is scale there and you don't have to sit in your car at 6:50 am on a freezing morning waiting for Kmart to open.
The only people who actually made a profit back then were scalpers who quickly flipped figures and made their money back 5x over, or backroom clerks who were super well-informed. But what is that money? Still hundreds of dollars?
There's a classic, classic WSJ article on this in the Media Articles thread:  https://www.wsj.com/articles/SB835566746105679000

I cant say I ever collected anything in the hope of striking it rich. Ive had a couple of collectibles that reached significant value but nothing that I ever cared to part with. Everything I collect is tied into memories of a movie or show that I like or tied into shared moments with family and friends.

Here it is two-thirds of the way down on this Atari forum page: https://atariage.com...mini-to-resell/

A very dedicated scalper, for sure, but not very representative of scalpers perhaps being in a very small "pro" category, having filled his apartment with store shelving and hundreds if not thousands of items. But as a private business model, this is perhaps what was needed to make money actually flipping figures. Sounds like a full-time job, or a summer job for a college student.

That's Trek line manager Chris Overley in the center. He took over for Jim Garber, and stayed in the position through May 1998. Overley took over at an exciting time for the franchise, but a lot had changed for the Trek line between the highs of 1994-1996, and from 1996 to 1998. Sci-fi and Trek were still very popular, but the Trek line had suffered somewhat in this late period. A lot of things seemed to be a one-off effort.

Even at this late stage there had been some talk of doing the TOS bridge playset, and that was something that had been built in suitcase form and shown to the public, even making it into catalogs, but in the end it didn't make it, and Overley explained that to do the TOS bridge properly it would have been very expensive, to the point of scaring retailers with high sticker prices.

Overley was once asked about doing a Shelby figure, but did not appear enthusiastic. (I think it would have been cool to do a number of obscure TNG officers later on, even if they were head swaps).

In the background, if you recall, is a mockup of the prize that the company had offered, which was a media center built by Trek set builders. 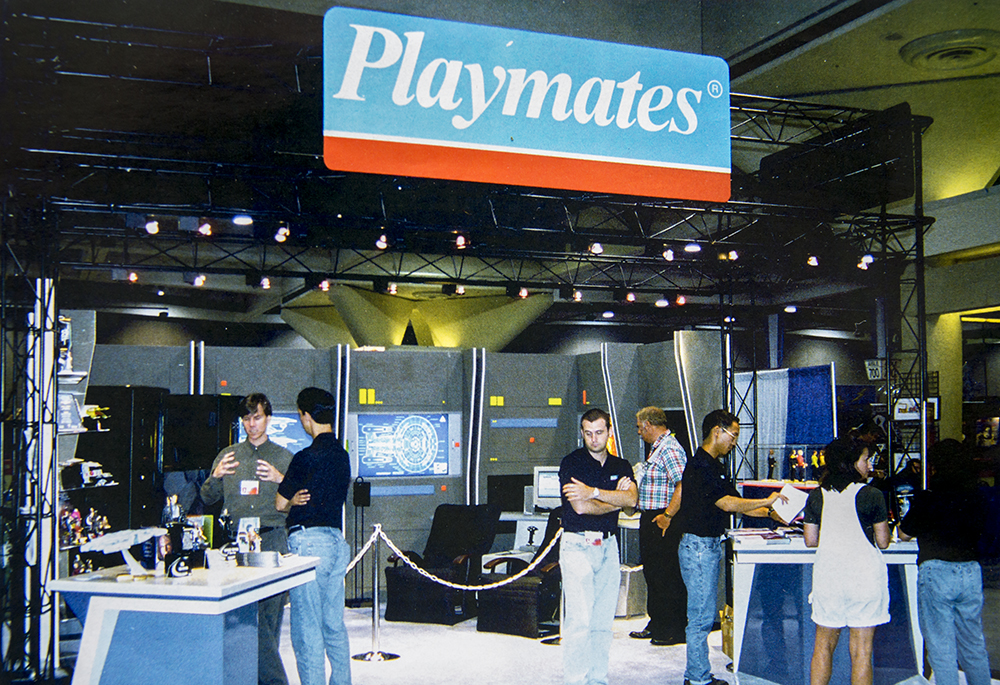 The VHS Worf, which Overley said the company had done at cost for the Paramount VHS release, saying that they just did it to do something nice and did not make money on it. 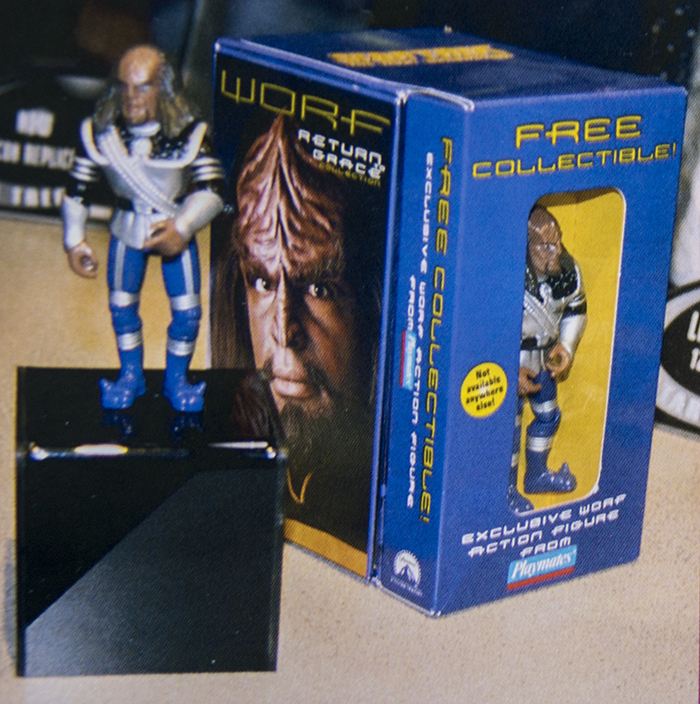 A number of the Latinum series prototypes shown at the 1997 San Diego Comicon. Note the Borgified Data there, and the Latinum edition 6-inch and 12-inch formats. Data would have been the 6-inch.

But in 1997, had the ship sailed already on First Contact stuff? 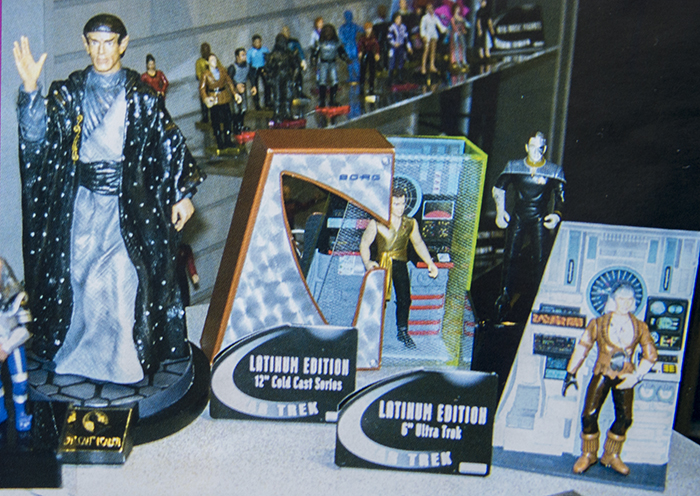 Here's a manufacturer's display of 1993 and 1994 figures, following up on the first wave.

A few notable things here: These are all likely hand-painted, so there are quite a few paint and sculpt differences, including a dress uniform Geordi with a swiveling midsection which was later dropped, Dathon is painted very differently and has an integrated knife pocket rather than one design to hold an accessory knife.

Red Data from 1994 is previewed here as well, perhaps a little early, while some other 1993 figures like Lore and Ambassador Spock are not shown at all. 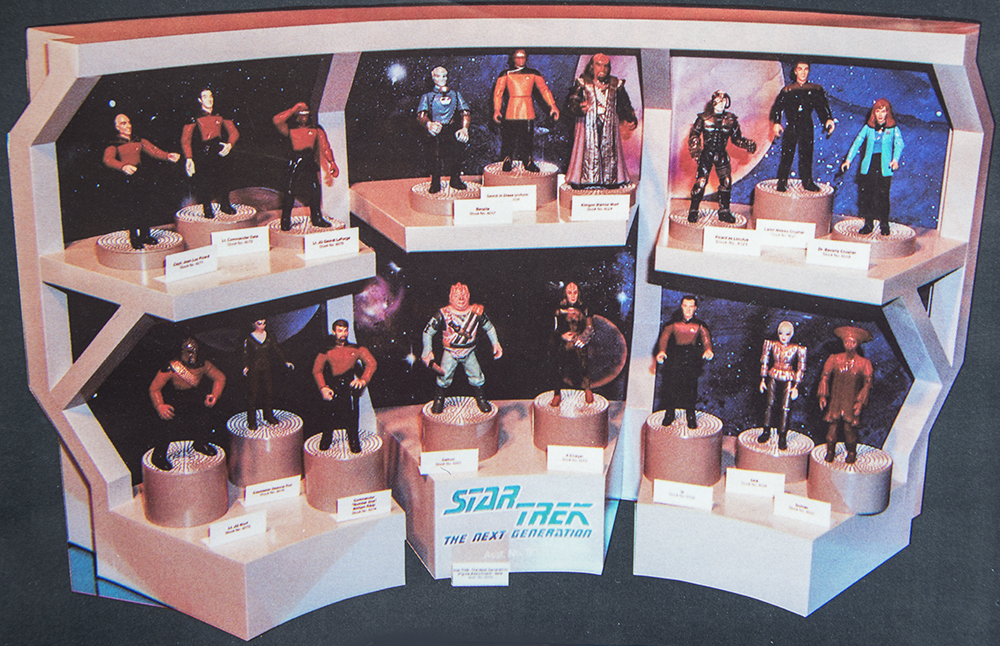 That would make an excellent display base for home use as well.... I can see putting some of my custom figures on there.

I'm surprised they built something so elaborate, yet not very Starfleet-like. For example, they could have had a cutaway of several Galaxy-class corridors, three levels of those.

I wonder if this is a reuse of some other display, but with space backgrounds glued in.

Swap out the background space pictures on the top row with enterprise d corridor panels.
Take the figures off of the small cylinder stands.
After doing that, in my mind it reminds me of a cut out of ten forward and the deck above.