9 replies to this topic

Hey all, please email me at dan.skrezyna@gmail.com if any of you will be going to cons where they are signing. Ill gladly send you the card, money for the auto and something or your time/effort.

I will let you know if they are at any of the cons I go to,you never know who pops up at Comic Con or NYCC,or any of the UK ones. Have you tried writing to them? I used to do that before I started doing cons and got the entire Voyager crew.....loved the little note Jeri Ryan wrote,lol....,almost the entire DSN crew,missing two or three,and even though Aron Eisenberg took his time replying he did write me a nice letter explaining he likes to reply personally to everyone. Still missing two from Enterprise,got the entire TNG crew,Whoopi Goldberg even sent me a pic of her and Patrick Stewart,so one day I could get him to sign it too. Have not got that many TOS ones,absent is the trio,and even though I've had plenty of opportunities to get at least Shatner and Nimoy,I just never bothered. Sometimes just seeing them,maybe a quick chat or a pic,is more than enough for me these days. Only one from new movies I got is Simon Pegg,lol.

So yeah,you should try writing to them as well,cheaper too,as they would only ask for an SAE to cover postage. I sent all mine via Paramount at the time,don't know if they still forward fan mail though.

Anyways,I'll google some cons,see if they're on FB and ask if they have any upcoming events,and check the cons I know already now that I'll be going to.

Thanks for the response.  I also collect baseball cards and a guy on one of the forums does that as well to get autographs and he tries to get the whole set signed and he sends out like 30 letters a day

and he also shared the letters he gets back from sone of the players, amazing stuff.. I think they call it TTM?  Not sure what it stands for but it did cross my mind to write a letter and include the card with a SASE. Iwould then try to get it slabbed by PSA as a keepsake.

Im going to the US in January for three weeks for vacation to visit family. Ill be in San Diego for two weeks and Chicago for one week.  While in San Diego, I had thought about going up to L.A. to visit Ciroc Lofton's cafe, but I need to check to se if it's still in operation.  I think there'd be a decent chance of running into him.

If you google Cafe Cirroc it seems to be closed. It was on Jefferson Blvd. in Culver City.

I really love when the people I write to include a little note or letter. Best thing is meeting them at cons,and the best ones are the multi cons,not JUST Trek or SW or whatever,'cos quite often they'll have more time to chat. At least that's my experience,like with Marina a couple of years back,and Chase Masterson and Denise Crosby a few years before that. Great fun!

Still trying to decide how to store or display my autos,been thinking about a Wall of Fame,lol!

TTM? Never heard of it. Gotta look into that. Oh,of course! It stands for Through The Mail! Logical really. lol

Bet you'll have a lot of fun while in the US,I know I do every single time I go over there. Even if Cafe Cirroc is closed you should still take the trip to L.A.,plenty of fun stores to check out,and you could pop by Bronson Canyon,where every Trek show has filmed,and also the entrance to the 60's Batcave,lol! It's not a long trek. And go by Griffith Observatory,since it's close,and it's just fantastic! Further out there's Vasquez Rocks,another famous location from numerous Trek episodes and other movies. You'll recognize the rock formation instantly. It's a bit of a drive,but well worth it.

Are you going?  I can try to get the card mailed to you by Thursday. Please let me know.

Sent you a PM. Please let me know if you are going this wekeend to the con in SF. I still may be able to get the card mailed to your shipping address.

Hey I might not be going now, I have to work. And I looked it up again amd I dont see him on the guest list this year

If anyone is going to the Las Vegas 50th con and can get me these two autographs.. please contact me!!!

They are both scheduled to appear.

I will pay you for both of their autos as well as a third of your choice... within reason.

Ill need to send you an item to get signed so please let me know asap. Thanks.

I absolutely love this piece I thought of and had someone attending the STLV con a few years back help me out.  If youve seen the DS9 ep, "In The Cards" then you know all about this piece. 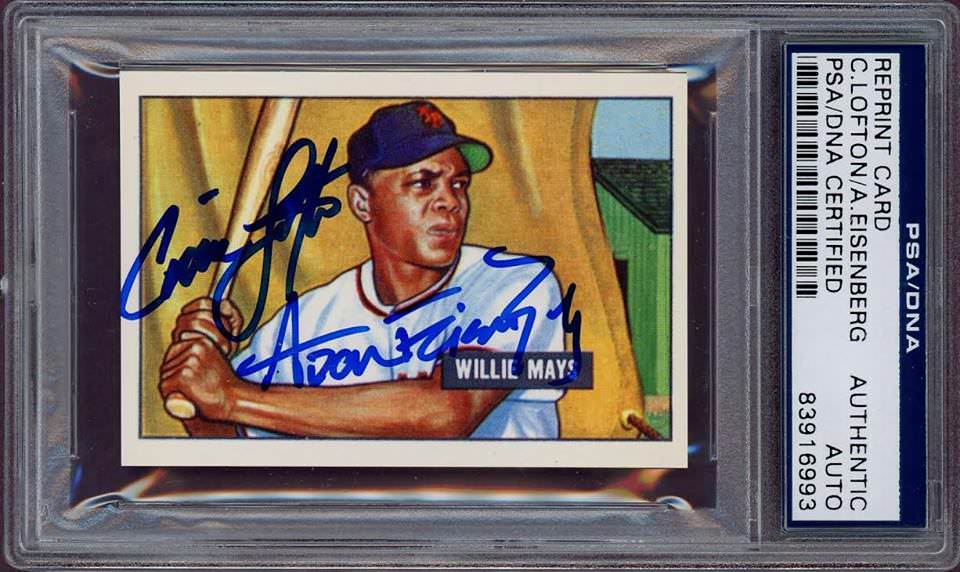