How is the quality of the Rod.com built props?

I've never purchased a roddenberry kit, though they look great, but I'm wondering if anyone has ever purchased some of the pre-bulit props from them?

My understanding is that basically the guys from HMS make these, which means they are pretty much screen accurate, they just don't have screen time?

I'm wondering because I had the opportunity to pick up a built TOS tric and Phaser for what seemed to be a good price, so I grabbed them.

I guess I'll know soon enough when they arrive, but I figured a few people here (like FHC) might have one or two and could tell me if I'm in for a disappointment or not!

I've bought a good many of their kits, but never a built prop. However, the few who have over on TPZ seem to be very happy with them. HMS is a professional prop house, so the work should be top notch. Just about the best you can find.

The TOS phaser and tric are pretty much the same as the ones that HMS built for DS9's T&T episode, so they should be a nice addition to your collection. They actually aren't accurate replicas to the actual TOS props, but they are accurate to the DS9 versions.

I agree with Knightone. I have had two pieces built by them and I would recommend them. Sadly the guys at HMS don't get that much of the total cost.

Yep, that was my understanding... I was poking around on TPZ, and like you said, the consensus seems to be that they are great pieces, just a bit on the pricy side.

I basically got the pair for 1/2 of what they list for on rod.com, still a pretty penny, but more reasonable.

Got my Rod Phaser and Tric today.

Both very nice! I actually thought I'd be more impressed by the Tric, but the phaser really blew me away!

I think that might be because I have the MR Tric, which is impressive as well, and until now I've only got the DST phasers. The rod build is basically the same mold as the DST (or I should say the DST is the same as the Rod Mold), but its really solid and has a great feel in the hand!

I was comparing the DST Tric to the ROD tric, and I can see what a great value the DST tric is comparitively speaking, but the real brushed metal finished in the Rod tric is really nice!

That's awesome that your happy with your purchase Gothneo.... Would you mind posting pics of your new babies !!! Would love to see them up close

I just ordered a working Nemesis Phaser from a reputable prop artist ...The phaser has the opening energy cell and actually has Majel Roddenberry's voice, as the computer, that gives an audible warning when the phaser is running low on power. I had to have it.

Neat! Yeah, I dug out the DST Phaser and I was going to do side by side shots. I'll try and get them up tomorrow!

Yeah, that'll be great... looking forward to some pics ...

This is the DST version, and the Rod version of the same T&T Phaser. 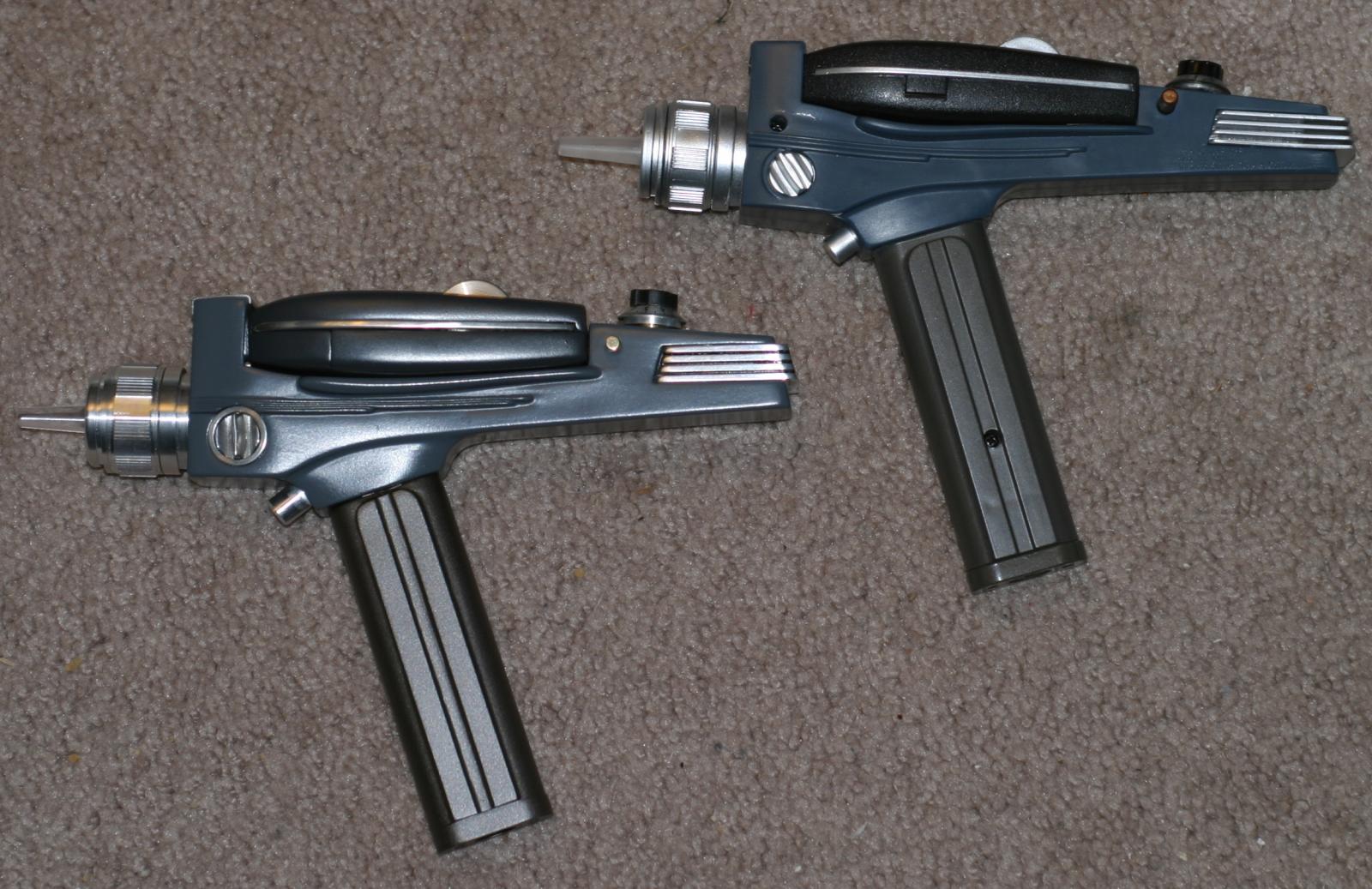 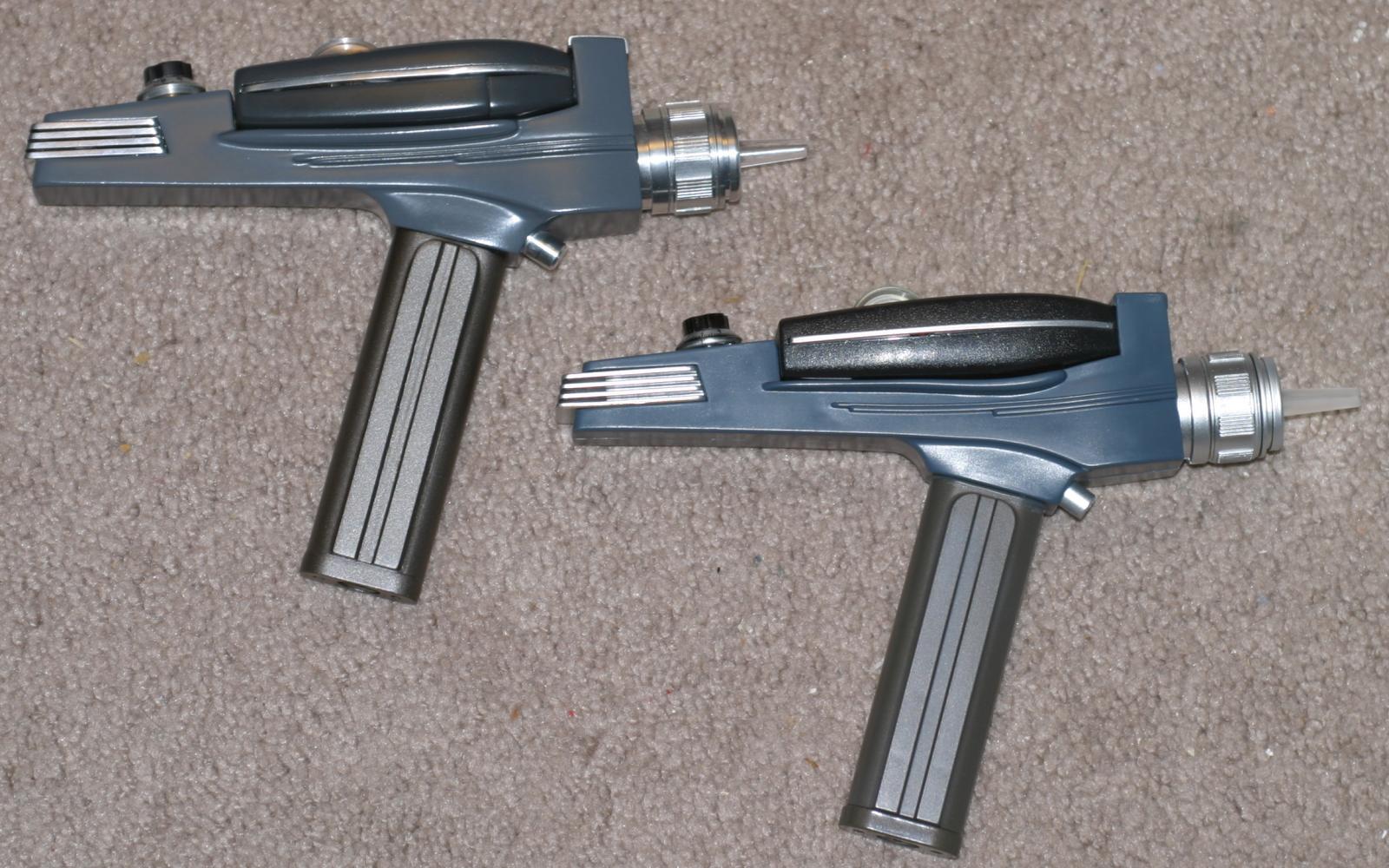 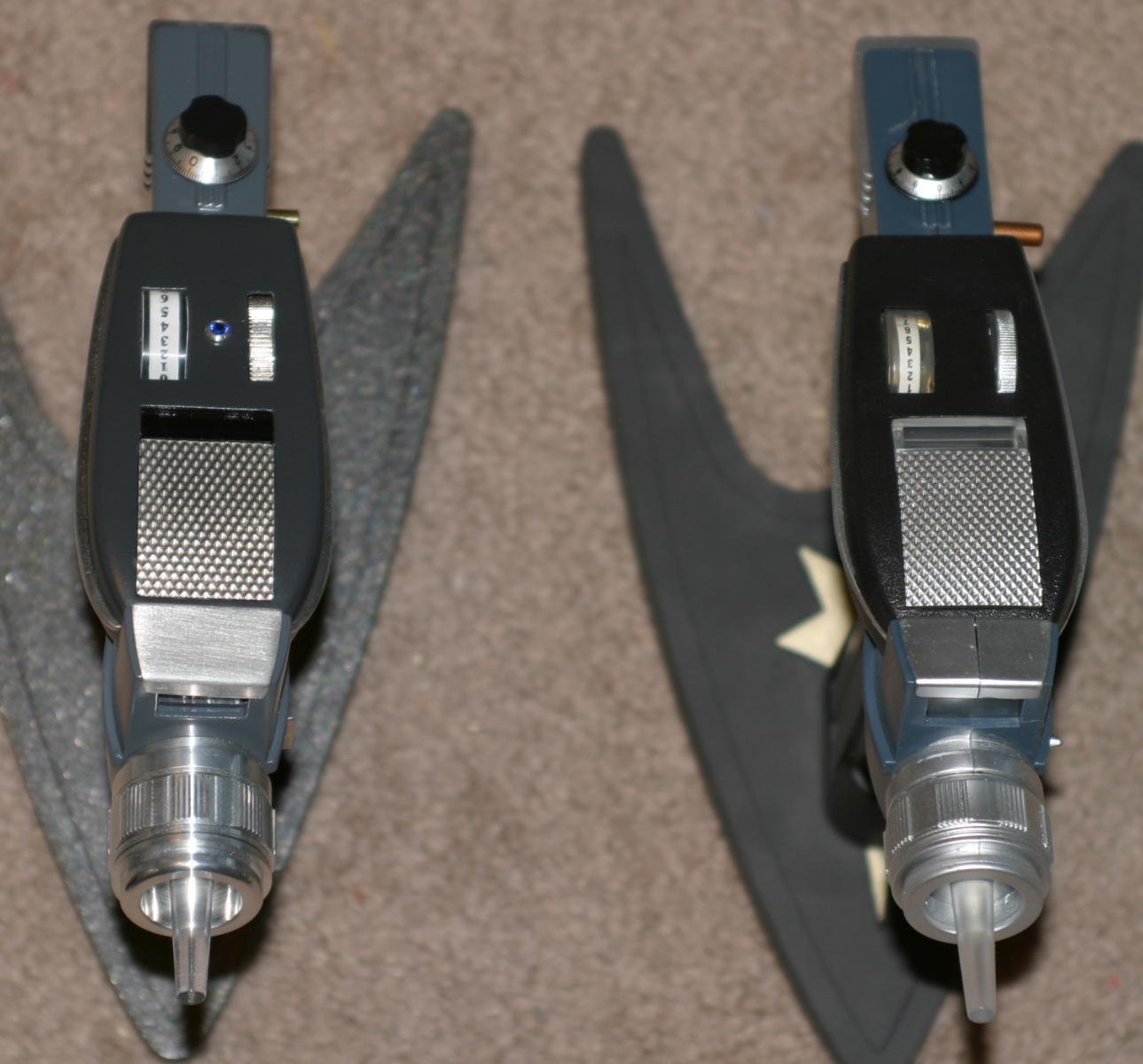 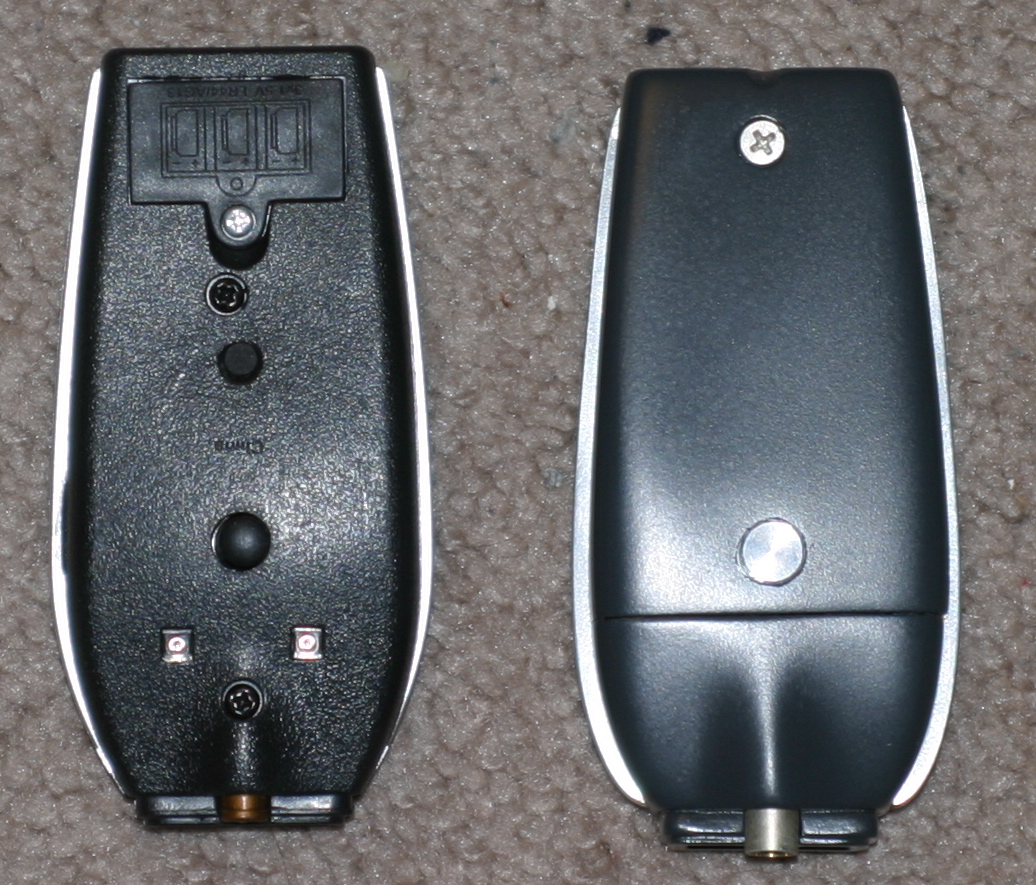 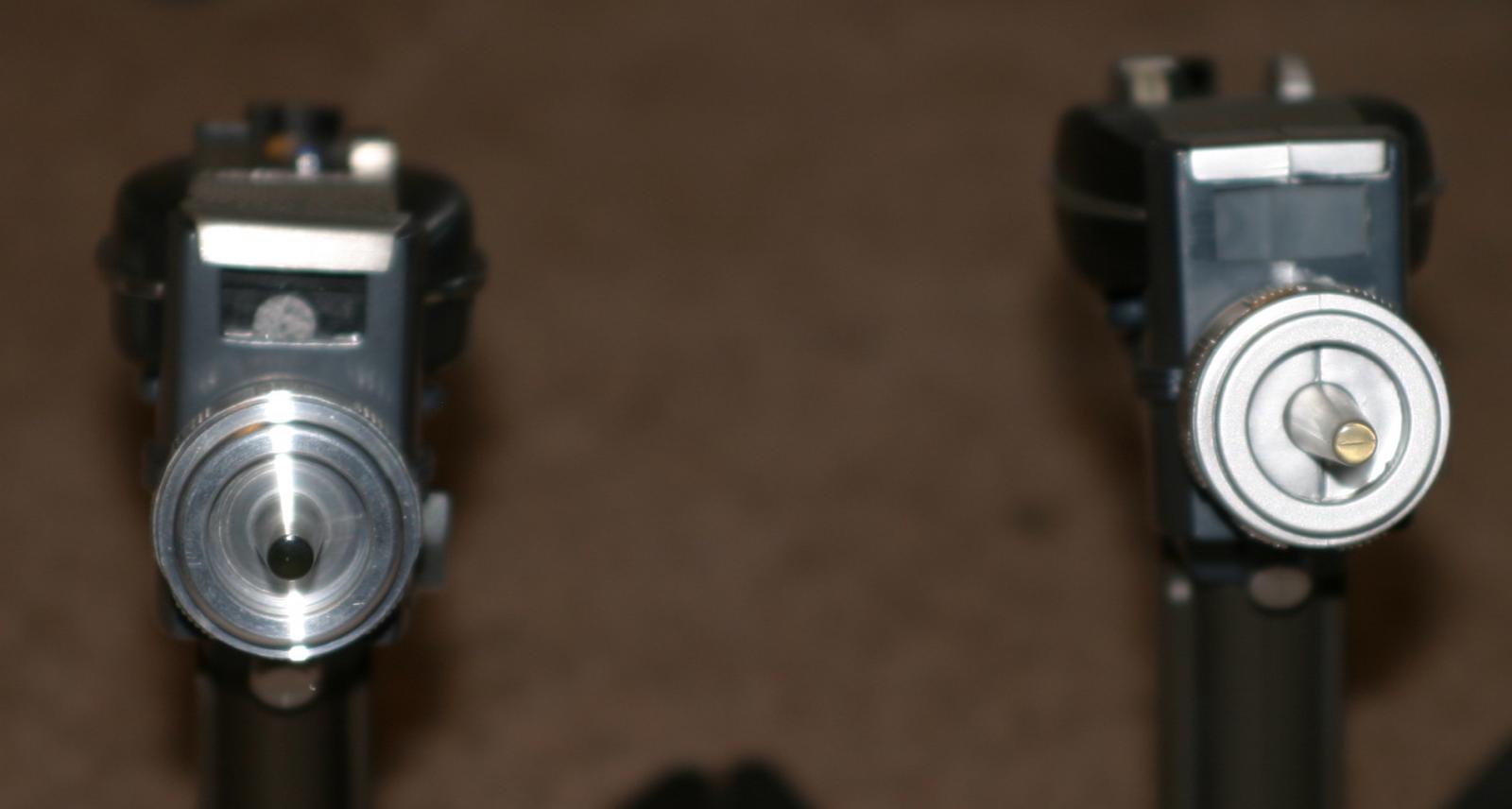 I must say I wasnt so happy, because first of all - they send me two of them instead of one that I ordered. It was horrible, because when the package arrived, they want to pay the second one. I must explain on the Custom department that i ordered only one... fill many forms and wait about two hours to finely get my tricorder. They give it to me under one condition only - I have to send the second one back on my own costs. Fortunately the roddenberry.com then apologized to me and return the shipping to my account.

About the kit - the first impression was awesome. But if you look more close you will find that the parts do not fit into one another. Its just rough-cast. But I guess its nothing that a putty (glue) cant fix.

Oh My :-( I can see how frustrating that would be. I'm glad to hear the error was corrected.

I was thinking of picking that kit up my self. I know they say you need to plan on sanding and using putty to make most of the kits so that doesn't really surprise me, but Id love to see some pictures of your final product!

Oh And welcome to the forum!