7 replies to this topic

This is one I have never seen before:

Thats kinda neat, and if i was a rich mego collector, i would get this one too. There are many Mego customs that ive seen around different websites that would be very cool to have. Some look better than most of the actual Aliens Mego put out, which in some cases were very inaccurate to the series charaters. I mean, the Mugatu didnt wear clothes, and i imagine if it did, it wouldnt have wanted the ones it had on in the mego version, lol. We never saw a Neptunian that i know of, The Released mego "Keeper" was actually a Balok lookalike and the Talosion mego release looked like a clown to me. The Gorn had on a Klingon uniform and had a dinosaur head and for some reason the Klingon and Romulan carried Federation phasers that were colored red. Back in the 70's, the kids didnt care that they were not accurate, they were just fun to play with, heck they still are. If Mego had realized what the future held for Star Trek collectibles, they may have made more accurate Aliens and put out more 8" figures, stay away from 3 3/4 and 12" figures and they might still be in business today as well.

I was just looking at that the other day.

I was also taking good note of those Alien figure at the Mego museum....the Gorn in Klingon attire! the 'Clown' looking Keeper. And Mugato....dear God!

Provided they put up a nice fight with Kirk & co, I'm sure kids didn't mind at all.

I would really like to track down one of those Palisades Roddenberry figures one day:
(I think this was a Palisades effort??)

QUOTE(Artistix @ Nov 20 2006, 04:28 PM) <{POST_SNAPBACK}>
I would really like to track down one of those Palisades Roddenberry figures one day:
(I think this was a Palisades effort??)

Yes, it was Palisades: press release 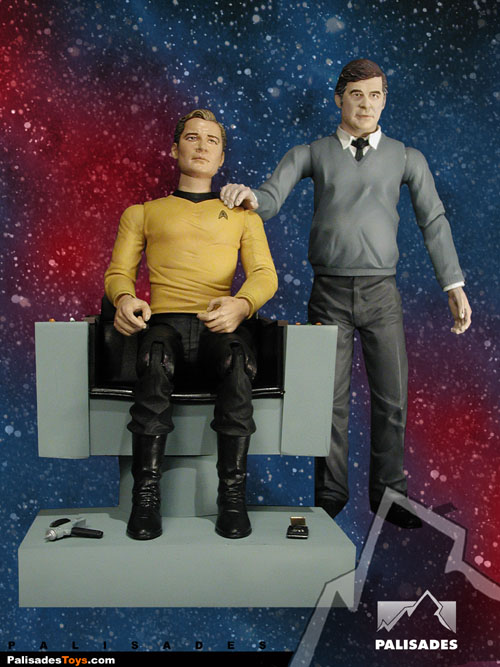 Wow...thats a heaps better pic. Cheers for that Pickard.

I wonder if DST has Roddenberry in mind at all.

I'm not sure if he is a figure many would go for...but I would love to see him.

I recall the Palisades set was on eBay not long ago.

QUOTE(Cpt. Phil T. Berns @ Nov 21 2006, 03:36 AM) <{POST_SNAPBACK}>
I would prefer a figure of the man who saved Star Trek (Harve Bennett) instead of one of the man who nearly killed Star Trek (Roddenberry).
I think Harve Bennett deserves a lot of credit for making the franchise successful with the movies, but i can think of a lot of figures i would rather have than a Roddenberry or Bennett figure. Of course, if a Roddenberry/Kirk/command chair from TOS and a TWOK Kirk,command chair/Bennett set were put out, i would buy it.

I wouldn't mind. I really liked Jim Henson being made as a Muppet & George Lucas as a Stormtrooper...I plan on buying both figures at some point.

I wouldn't be adverse to the figures in regular or movie Classic uniforms...though I'd probably prefer them in casual gear as Palisades chose for their Roddenberry.