25 replies to this topic

I had to come back in and look at these pics. I'm currently trying to decide between this and the Grissom kit. It's a hard choice.

If I don't have it, they never made one.

I do plan to get the defiant but I already pulled the trigger on the Grissom and BoP set. I'll have to start a thread when it gets here. I really wanted to do a ship I've never done before.

If I don't have it, they never made one.

I was at Walmart today and walked past a shelf with models on it. I was surprised to find several polar lights Defiant kits and even more surprised to see it for $14.97. Yes. I bought one.

Just a quick update, as a lot of time has passed!

I've managed to buy two of them, from New York. I couldn't find any in the UK, which caused me to near lose my mind at the thought that I might have missed my chance, but nah, all good. Overall cost (including shipping/customs) is going to be around £10 more expensive than if I'd bought ONE kit over here, crazy. Anyway, I've been doing a ton of research in preparation for making the first one, which will just be a static model (to be used as a toy/frisbee, etc lol). I want to try and make this as accurate to the filming miniature as possible, not to a super-anal degree in terms of matching the colours exactly, but as close as possible. As I won't be starting for a while, I thought I'd share a few things I've discovered in the time since I was last around here:

First of all, there's now some fantastic aftermarket extras for this kit. Most notable are aztek dummy's mask set (something which has made me decide to not use the aztec decals that come with the kit, at least not for solid colour):

Secondly, a company called Green Strawberry have made a photo-etch set together with some additional resin parts. These include the INTERIOR of the nacelles (delighted by this!), and even the shuttlebay, which is amazing at this scale, but won't be something I'll be taking advantage of:

The additional resin parts for the nacelles will allow for amazingly accurate lighting, which is something I'll be doing with the second kit (once I've got the lay of the land with the first one). I'll be going to town with the second one, big plans mainly centred around things like can I fit a small rechargeable battery inside, that could be charged wirelessly? All dreams at the moment obviously, but with the things I've seen during my research, the possibilities for things like that are there nowadays.

The final thing, and this concerns the first one I'll be building (static), is something that caught me off guard, and is honestly jaw-dropping in terms of why haven't we seen companies do something like this ages ago (Prometheus, I think you'll love this dude):

It's a paint powder that makes glow-in-the-dark paint. It comes in several colours, but I linked to the blue one above as it's immediately clear how amazing this stuff could be. However, here's two examples of trek ships (Defiant being one) made by a guy on reddit, that use this paint to incredible effect. Just to be clear, these models are not lit by LEDs, it's just glow-in-the-dark paint. Also notice how these shots are taken in a lighted environment: 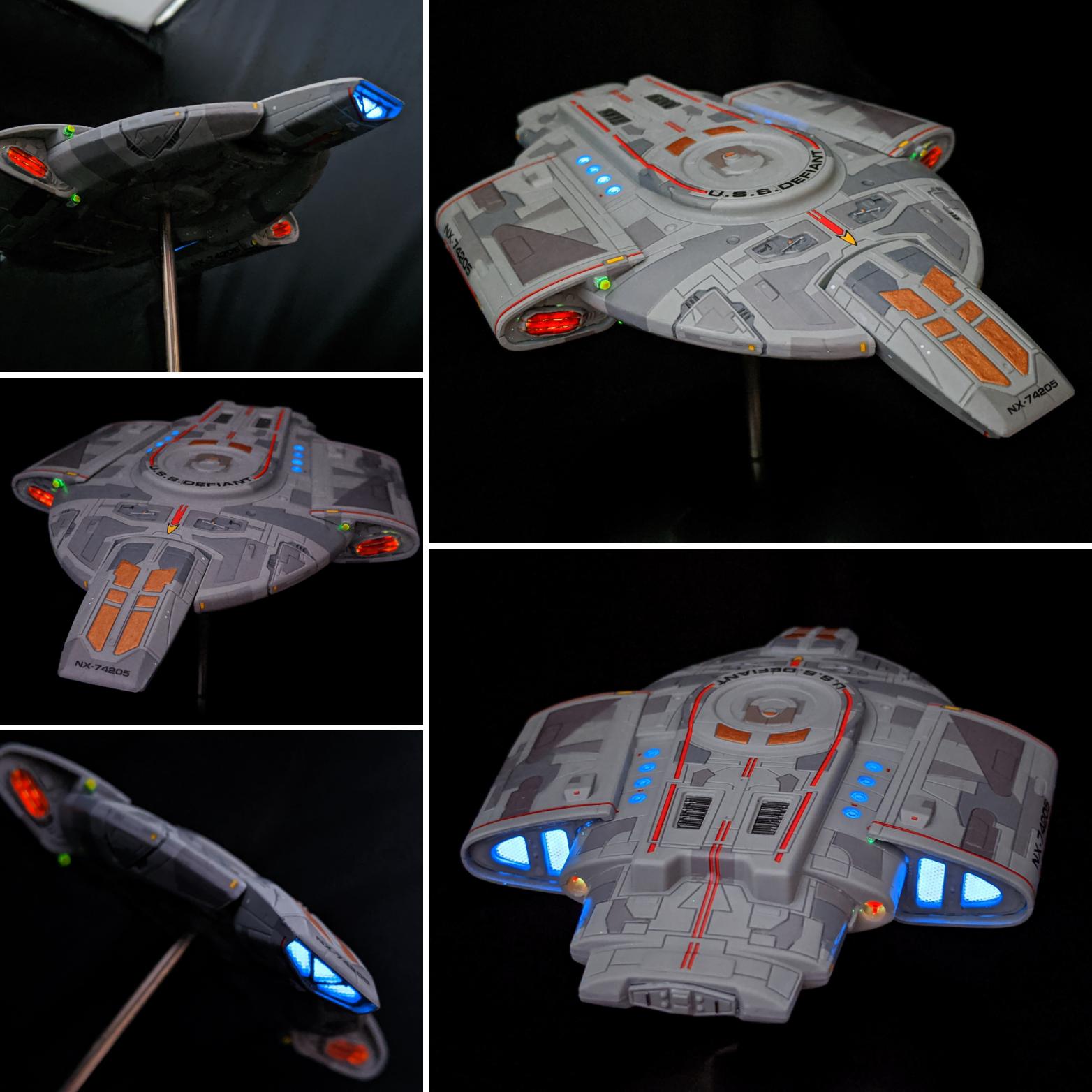 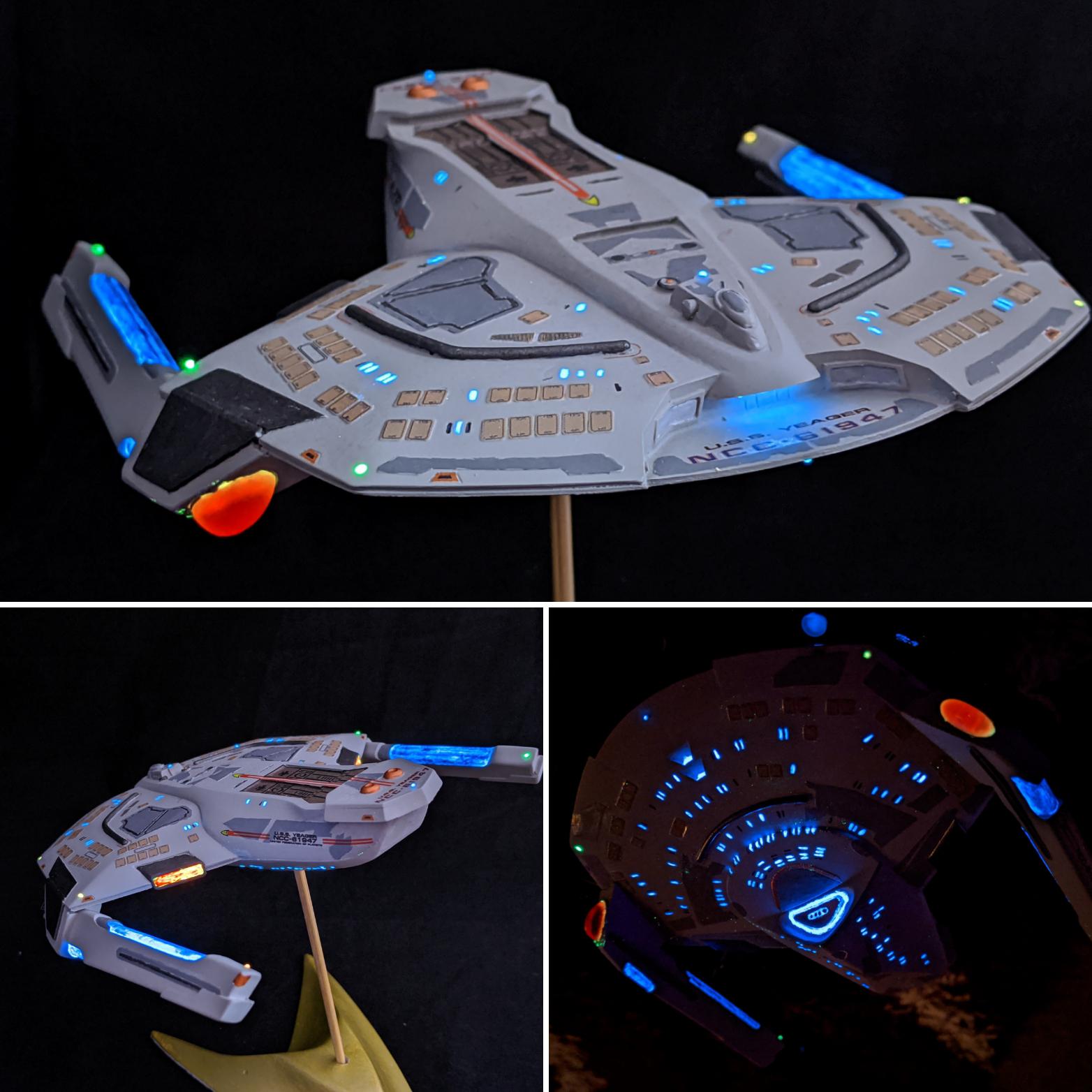 The spotlight effect on the Yeager's registry details made my jaw drop!

You'll see a few odd colour choices he's used (green pulse phases, yellow port lights on the Sabre), but that's down to him using the green lit paint. The good news is that a pink shade is available already (should help make red), but the guy who makes the paint is working on a red shade, amongst others.

So yeah, tons of exciting stuff. When I start the first build, I'll make a progress thread here. Won't be for a while yet, but I can't wait to get started.

EDIT: Randomly, I'd LOVE to see someone make the Excelsior with that lit blue all over it.

can't wait to see how your kits turn out, the glow in the dark paint is awesome.

Yes, please more with the glow in the dark paint!!😮

Back to Ertl / AMT